This post will look at the triangle behind North Carolina’s Research Triangle using Mathematica’s geographic functions.

A spherical triangle is a triangle drawn on the surface of a sphere. It has three vertices, given by points on the sphere, and three sides. The sides of the triangle are portions of great circles running between two vertices. A great circle is a circle of maximum radius, a circle with the same center as the sphere.

(That was the origin of the name, though it’s now applied more loosely to the general area around these three universities.)

We’ll take as our vertices 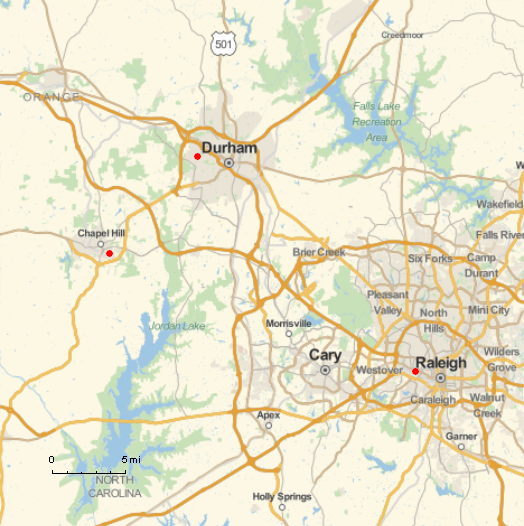 The map above was produced with the following Mathematica code.

Note that longitude is in degrees east, so the longitudes above are negative.

To find the distance between two locations, you can use the function GeoDistance. For example,

tells me that the distance between UNC and Duke is 8.99185 miles. I assume it displays miles by default based on my location in the US, though the GeoRange option above defaults to meters. You can make the system of units explicit. For example

If we want to find the length of the side c in degrees, we can use the Earth’s radius.

The angles add up to 180° only because our triangle is small compared to the earth’s total area. The actual sum should be slightly more than 180°, but we’ve not retained enough precision to detect the difference. In general the “spherical excess,” i.e. the amount by which the sum of the angles exceed 180°, is proportional to the area of the triangle.

One thought on “Spherical trig, Research Triangle, and Mathematica”