The previous post showed how the number of Unicode characters has grown over time. 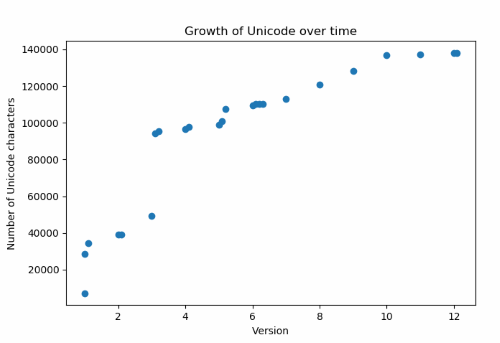 You’ll notice there was a big jump between versions 3.0 and 3.1. That will be important later on.

Unicode started out relative small then became much more ambitious. Are they going to run out of room? How many possible Unicode characters are there?

Going one level of detail deeper, which numbers correspond to Unicode characters?

The hexadecimal numbers 0 through 10FFFF are potential Unicode characters, with exception of surrogates and non-characters.

Unicode is divided into 17 planes. The first two hexadecimal “digits” indicate the plane, and the last four indicate a value within the plane. The first plane is known as the BMP, the Basic Multilingual Plane. The rest are known as supplemental planes.

Why are there only 17 planes? And what are these mysterious surrogates and non-characters? What purpose do they serve?

The limitations of UTF-16 encoding explain why 17 planes and why surrogates. Non-characters require a different explanation.

This post mentioned at the top that the size of Unicode jumped between versions 3.0 and 3.1. Significantly, the size went from less than 216 to more than 216. Unicode broke out of the Basic Multilingual Plane.

Unicode needed a way to represent more than 216 characters using groups of 16 bits. The solution to this problem was UTF-16 encoding. With this encoding, the surrogate values listed above do not represent characters per se but are a kind of pointer to further values.

When you encounter a surrogate value, you don’t need any further context to tell what it is. You don’t need to look upstream for some indication of how the bits are to be interpreted. It cannot be a BMP character, and there’s no doubt whether it is the beginning or end of a pair of surrogate values since the high surrogates and low surrogates are in different ranges.

UTF-16 can only represent 17 planes, and the Unicode Consortium decided they would not assign values that cannot be represented in UTF-16. So that’s why there are 17 planes.

That leaves the non-characters. Why are a few values reserved to never be used for characters?

One use for non-characters is to return a null value as an error indicator, analogous to a NaN or non-a-number in floating point calculations. A program might return FFFF, for example, to indicate that it was unable to read a character.

Another use for special non-characters is to imply which encoding method is used. For reasons that are too complicated to get into here, computers do not always store the bytes within a word in the increasing order. In so called “little endian” order, lower order bits are stored before higher order bits. (“Big endian” and “little endian” are allusions to the two factions in Gulliver’s Travels that crack boiled eggs on their big end and little end respectively.)