The previous post looked at Gray code, a way of encoding digits so that the encodings of consecutive integers differ in only bit. This post will look at how to compute the inverse of Gray code.

In case you’re not familiar with the notation, the >> operator shifts the bits of its argument. The code above shifts the bits of n one place to the right. In the process, the least significant bit falls off the end. We could replace n >> 1 with n // 2 if we like, i.e. integer division by 2, rounding down if n is odd. The ^ operator stands for XOR, exclusive OR. A bit of x ^ y is 0 if both corresponding bits in x and y are the same, and 1 if they are different.

The inverse of Gray code is a more complicated. If we assume n < 232, then we can compute the inverse Gray code of n by

For n of any size, we can compute its inverse Gray code by

If n is a 32-bit integer, inverse_gray32 is potentially faster than inverse_gray because of the loop unrolling.

Here’s a plot of the Gray code function and its inverse. 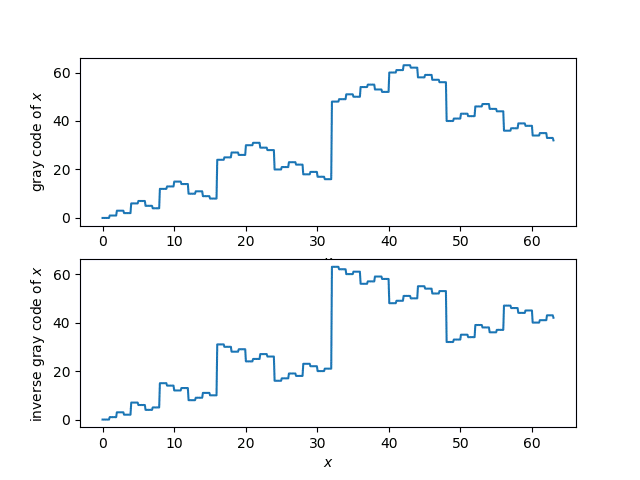 How do we know that what we’re calling the inverse Gray code really is the inverse? Here’s a proof for 32-bit integers n.

How is that a proof? Wouldn’t you need to try all possible 32-bit integers if you wanted a proof by brute force?

If we think of 32-bit numbers as vectors in a 32-dimensional vector space over the binary field, addition is defined by XOR. So XOR is linear by definition. It’s easy to see that shifts are also linear, and the composition of linear functions is linear. This means that gray and inverse_gray32 are linear transformations. If the two linear transformations are inverses of each other on the elements of a basis, they are inverses everywhere. The unit basis vectors in our vector space are simply the powers of 2.

The matrix on the left is for Gray code, the next matrix is for inverse Gray code, and the last matrix is the identity. NB: The equation above only holds when you’re working over the binary field, i.e. addition is carried out mod 2, so 1 + 1 = 0.

To transform a number, represent it as a vector of length n, with the least significant in the first component, and multiply by the appropriate matrix.

There’s a standard C function popcount that counts the number of 1’s in a number’s binary representation, and the last bit of the popcount is the parity of the number of 1s. I blogged about this before here. If you look at the code at the bottom of that post, you’ll see that it’s the same as gray_inverse32.