A random Fibonacci sequence f is defined similarly, except the addition above is replaced with a subtraction with probability 1/2. That is, f1 = f2 = 1, and for n > 2, 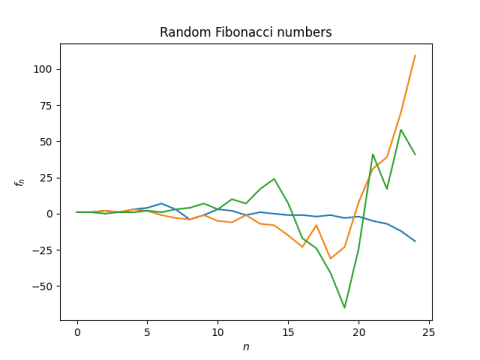 Here’s the Python code that was used to produce the sequences above.

It’s easy to see that the nth random Fibonacci number can be as large as the nth ordinary Fibonacci number if all the signs happen to be positive. But the numbers are typically much smaller.

Another way to say this is that

The nth random Fibonacci number does not have an asymptotic value—it wanders randomly between positive and negative values—but with probability 1, the absolute values satisfy

Here’s a little Python code to show that we get results consistent with this result using simulation.

which includes the theoretical value 1.1320.

Update: The next post looks at whether every integer appear in a random Fibonacci sequence. Empirical evidence suggests the answer is yes.