In [1], Goldman considers the probability of an m by n matrix having a saddlepoint if its elements are chosen independently at random from the same continuous distribution. He reports this probability as

but it may be easier to interpret as

When m and n are large, the binomial coefficient in the denominator is very large.

For square matrices, m and n are equal, and the probability above is 2n/(n + 1) divided by the nth Catalan number Cn.

by E. T. H. Wang. These bounds let us conclude that P(n, n), the probability of an n by n matrix having a saddlepoint, is bounded as follows. 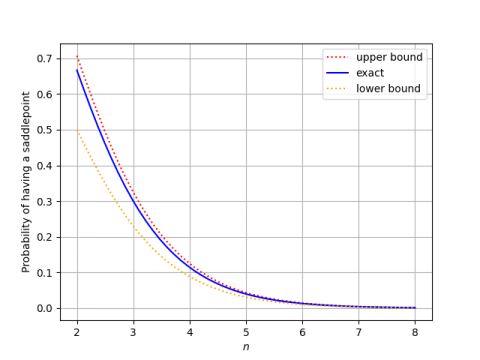 This shows that the probability goes to zero exponentially as n increases, being impossible to visually distinguish from 0 in the plot above when n = 8.

The upper bound on P(n, n) based on Wang’s inequalities is tighter than the corresponding lower bound. This is because Wang’s lower bound on the middle binomial coefficient is tighter (see plot here) and we’ve taken reciprocals.

One thought on “Large matrices rarely have saddlepoints”