I was reading a book on orbital mechanics recently [1], and one of the things that stood out was the use of two variations on sine and cosine, functions the book denotes by S and C.

Strictly speaking, the functions are defined to be the analytic continuation of the middle expressions to the full complex plane, and these continuations have the given power series.

These functions come up in deriving time of flight equations. The direct derivation has expressions that would have a singularity at zero because of square root terms, and recasting the solution in terms of the functions above avoids the singularities.

(Are these functions used outside of orbital mechanics? Do they have names other than S and C? If you’ve seen them before, please let me know.)

Second, the functions S and C are derived from sine and cosine, but you might not guess that from looking at their plots. 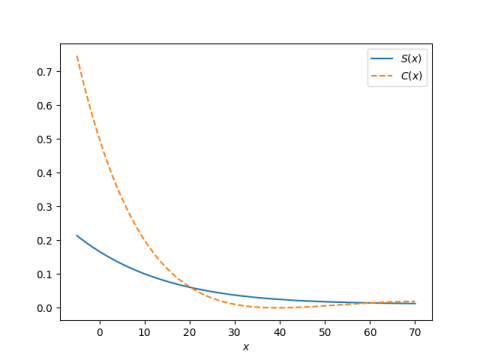 Third, you might expect the derivative of a sine-like thing to be a cosine-like thing and vice versa. Well, that’s sorta true in our case. The derivatives of S and C are related to the functions S and C, but its a little complicated.

Finally, when z is a real variable, we can evaluate S with

and evaluate C with

Written this way, it looks like the functions S and C are arbitrarily patched together. But the functions are smooth at 0, even analytic at 0 as the power series shows. The equations are not arbitrary at all but uniquely determined.

Update: Someone contributed this post to Hacker News and someone else left a helpful comment with some historical background. Apparently this work goes back to Karl Stumpff and was written up in a NASA technical report. It was further developed at MIT and written up in a textbook by Richard Battin.