Richard Arenstorf (1929–2014) discovered a stable periodic orbit between the Earth and the Moon which was used as the basis for the Apollo missions.

His orbit is a special case of the three body problem where two bodies are orbiting in a plane, i.e. the Earth and the Moon, along with a third body of negligible mass relative to the other bodies, i.e. the satellite.

The system of differential equations for the Arenstorf orbit are

The initial conditions are

Here’s a plot of the orbit. 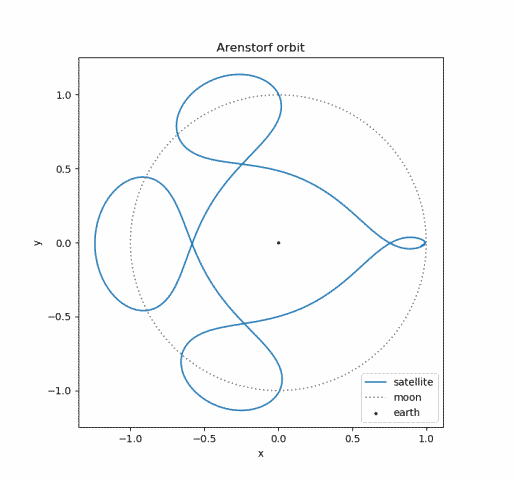 I found the equations above in [1] which sites the original paper [2]. Note that the paper was written in 1963, seven years before the Apollo missions. Also, before leaving NASA Arenstorf mapped out a rescue orbit. This orbit was later used on Apollo 13.

I was fortunate to do my postdoc at Vanderbilt before Arenstorf retired and was able to sit in on an introductory course he taught on orbital mechanics. His presentation was leisurely and remarkably clear.

His course was old-school “hard analysis,” much more concrete than the abstract “soft analysis” I had studied in graduate school. He struck me as a 19th century mathematician transported to the 20th century.

He scoffed at merely measurable functions. “Have you ever seen a function that wasn’t analytic?” This would have been heresy at my alma mater.

When I asked him about “Arenstorf’s theorem” from a recently published book I was reading, he said that he didn’t recognize it. I forget now how it was stated, maybe involving Banach spaces and/or manifolds. Arenstorf was much more concrete. He wanted to help put a man on the Moon, not see how abstractly he could state his results.

2 thoughts on “The orbit that put men on the moon”