The integral must be interpreted in the sense of the Cauchy principal value:

I tried playing around with the Hilbert transform in Mathematica and ran into frustration.

The direct approach doesn’t work, even though Mathematica has a way to specify that integrals should use the principle value. More on that below.

However, there is a theorem that says the Hilbert transform can be computed another way, and that worked in Mathematica.

With Mathematica I computed

The reason the direct approach didn’t work is that there are more subtleties than the singularity at x. The integral is also not absolutely convergent as t goes to ±∞. Rigorously defining the Hilbert transform of the sine function requires using generalized functions, a.k.a. distributions. Here’s an example of how that’s done with Fourier transforms; the development for Hilbert transforms would be analogous.

Other common examples of Hilbert transforms also ran into difficulties when trying to derive them in Mathematica. But the box function example worked because there are no issues at infinity.

Let’s try the alternate expression we used for sine above.

This gives us a messy but similar result. 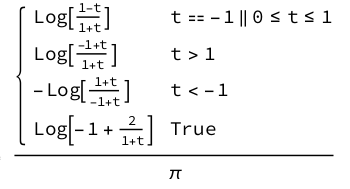 which can be written more compactly as

2 thoughts on “Hilbert transform and Mathematica”