When a math book has an intriguing image on the cover, it’s fun to get to the point in the book where the meaning of the image is explained. I have some ideas for book covers I’d like to write about, but here I’d like to point out three such posts I’ve already written. 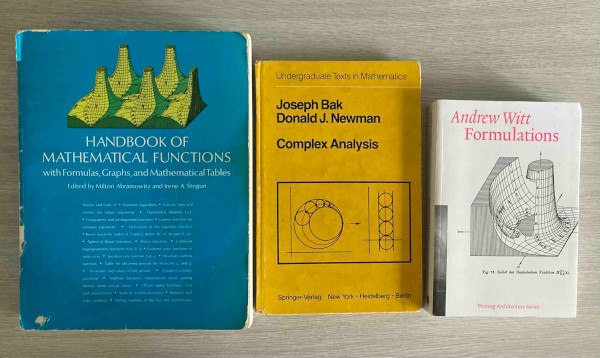 The book on the left is Abramowitz and Stegun, affectionately known as A&S. I believe the function plotted on the cover is the Weierstrass elliptic function, as I wrote about here.

As the image suggests, my copy of A&S has seen a bit of wear. At one point the cover fell off and I put it back on with packing tape.

The book in the middle is my well-worn copy of my undergraduate complex analysis text. The cover is a bit dirty and pages are falling out, a sort of Velveteen rabbit of math books.

I wrote about the book on the right here. I believe the image on the cover is the plot of a Hankel function.

Here’s a post explaining the image on the cover Abstract Algebra by Dummit and Foote.

And here is a post explaining the image on the cover of A Course of Modern Analysis by Whittaker and Watson.

One thought on “Book cover posts”