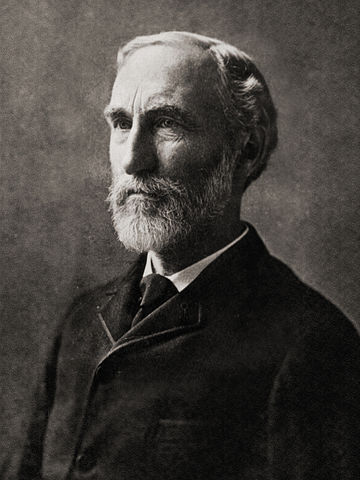 Josiah Willard Gibbs (1839–1903) was prominent American scientist at a time when America had yet to produce many prominent scientists. I first heard of him via Gibbs phenomenon and later by attending one of the Gibbs lectures at an AMS meeting.

As a warm-up to Gibbs’ method, let’s look back at the post on India’s Mars Orbiter Mission. There we determined an orbit by just two observations. What determined the missing three degrees of freedom?

The post on the Mars Orbiter Mission (MOM) didn’t use two arbitrary observations but two very special observations, namely the nearest and furthest approaches of the probe. Because the distances were known relative to Mars, we know the position of one of the foci of the orbit, i.e. the center of mass of Mars. And because the two observations are on opposite sides of the orbit, we know where the other focus is. And because these observations were along the major axis of the ellipse, we know the orientation of the ellipse. All together we know five facts about the orbit.

Gibbs method starts with three facts about the orbit, the position of a satellite at three points in its orbit. These are not simply three points on the ellipse but three measurements taken from the body that the satellite is orbiting. That means we know the position of one of the foci, i.e. the body being orbited. Gibbs’ method also assumes we know the mass of body being orbited, so that’s our fifth piece of information.

So with the Mars Orbiter Mission we had two special observations. The “specialness” of these observations provided two more pieces of data, and the fact that the measurements were taken from a focus of the orbit gave us the fifth piece of information.

There is a variation on Gibbs’ method that uses only one observation. It is based on radar observation, not optical observation, and includes the velocity of the object as well as its position. So two partial derivatives, rates of change in two perpendicular directions, replace two of the observations. We still need five bits of information to determine five degrees of freedom.

The methods this series of posts use the minimum amount of information algebraically necessary to determine an orbit. In practice, these methods are used for preliminary orbit determination, i.e. they give an approximate result that could be bootstrapped to obtain a more accurate solution.

Under ideal circumstances more further observations would be redundant, but in practice having more observations lets measurement errors cancel each other out to some extent. This observation was a milestone in the development of modern statistics: the problem of determining orbits from multiple observations lead to regression theory.

You can find the details of how to determine an orbit from three observations in Fundamentals of Astrodynamics by Bate, Mueller, and White. The book also covers determining an orbit from one radar observation with derivatives.

The next post in this series looks at Lambert’s theorem for determining an orbit from two observations (plus three other pieces of information).