A few years ago I wrote several posts about “squircles”, starting with this post. These are shapes satisfying

where typically p = 4 or 5. The advantage of a squircle over a square with rounded edges is that the curvature varies continuously around the figure rather than jumping from a constant positive value to zero.

We need to give separate names to the two things called squircles, and so I’ll name them after their parameters: p-squircles and s-squircles.

As s varies from 0 to 1, s-squircles change continuously from a circle to a square, just as p-squircles varies do as p goes from 2 to ∞.

The two kinds of squircles are very similar. Here’s a plot of one on top of the other. I’ll go into detail later of how this plot was made. 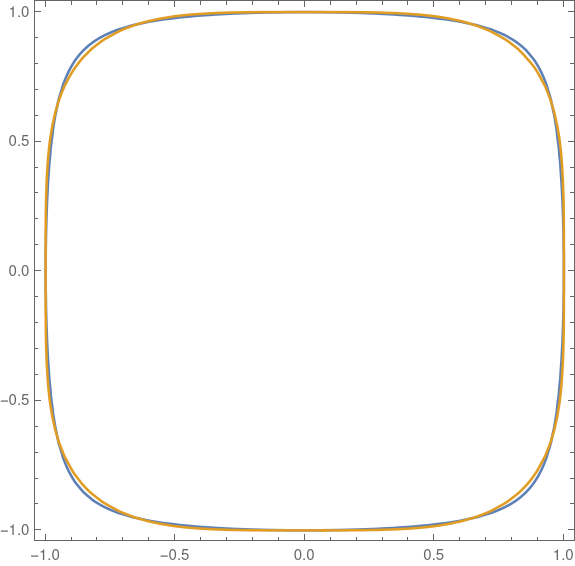 It’s remarkable that the two kinds of squircles are so different in the structure of their defining equation and yet so quantitatively close together.

I wanted to compare the two shapes, so I plotted p-squircles and s-squircles of the same area.

Here E is the “elliptic integral of the second kind.” This function has come up several times on the blog, for example here.

Both area function are increasing functions of their parameters. We have A1(2) = A2(0) and A1(∞) = A2(1). So we can pick a value of p and solve for the corresponding value of s that gives the same area, or vice versa.

The function A1 can be implemented in Mathematica as

The function A2 is little trickier because Mathematica parameterizes the elliptic integral slightly differently than does the equation above.

produces the following plot. This is the same plot as at the top of the post, but enlarged to show detail. 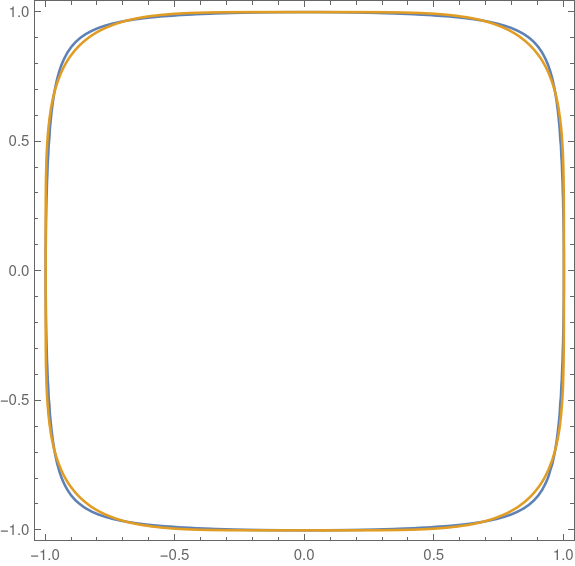 In both cases the s-squircle is plotted in blue, and the p-squircle in gold. The gold virtually overwrites the blue. You have to look carefully to see a little bit of blue sticking out in the corners. The two squircles are essentially the same to within the thickness of the plotting lines.

However, Fernández-Guasti was the first to use the term in scholarly literature in 2005. See the discussion in the MathWorld article.

One thought on “A more convenient squircle equation”