This morning I played around with the code from that earlier post and made some new images. 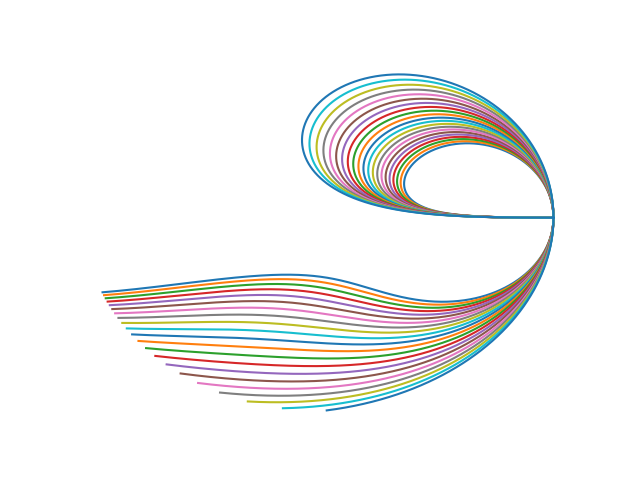 This image was based on the same function over a different range. 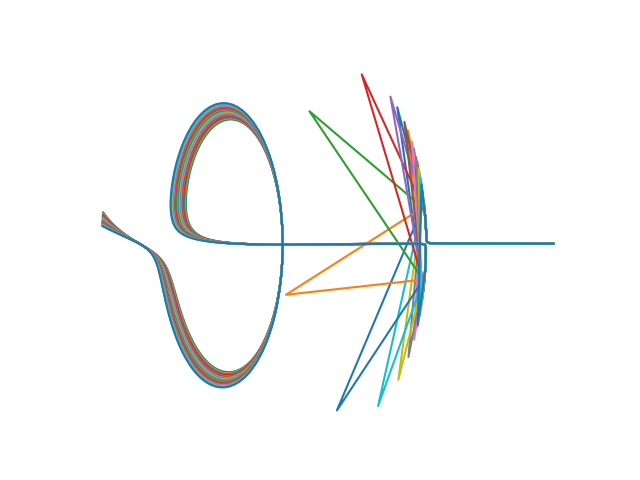 And this hummingbird-line images was based on exp(x) – x. 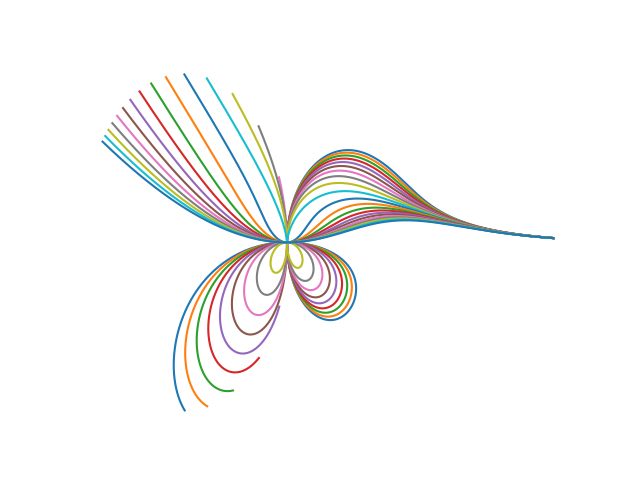 Here are a few more blog posts that have interesting images.

I recently discovered quiver, a tool for drawing commutative diagrams. It looks like a nice tool for drawing diagrams more generally, but it’s designed particularly to include the features you need when drawing the kinds of diagrams that are ubiquitous in category theory.

You can draw diagrams using the online app and export the result to LaTeX (tikz).

Here are some examples. 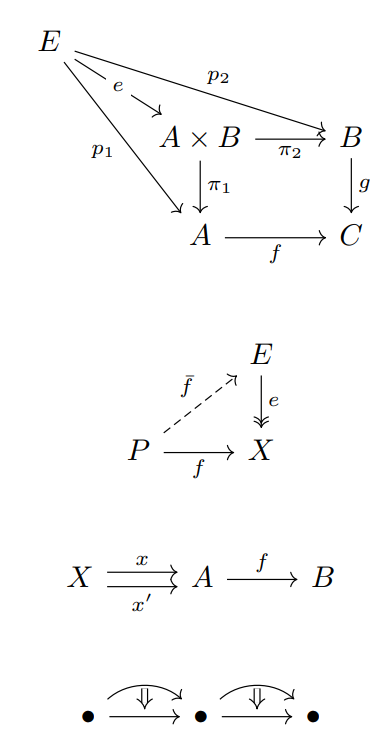 The app is mostly easy to figure out. The object and arrow labels are specified using LaTeX.

Quiver lets you position labels on either side of an arrow, or even inside the arrow as in the e in the first diagram above.

You can change the arrow and arrowhead styles, as in the second example.

It took me a little while to figure out how to have two arrows with the same destination and source, as in the third example. You use the “offset” setting to move arrows up or down do that they’re not on top of each other. And by default, the software helpfully assumes that if you want to move one arrow up a bit from center, you probably want to move the other one down from center by the same amount.

You can use the “curve” setting to draw arrows as in the final example. You can also draw arrows between arrows, as is common when working with 2-categories.

This evening I ran across a paper on an unusual coordinate system that creates interesting graphs based from simple functions. It’s called “circular coordinates,” but this doesn’t mean polar coordinates; it’s more complicated than that. [1]

Here’s a plot reproduced from [1], with some color added (the default colors matplotlib uses for multiple plots). 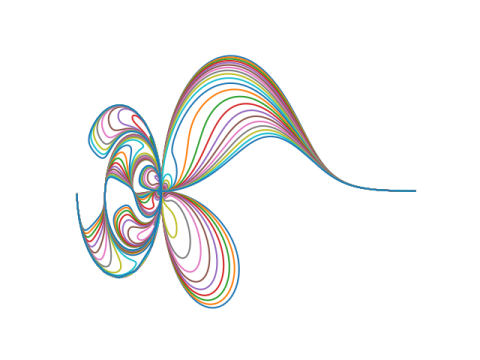 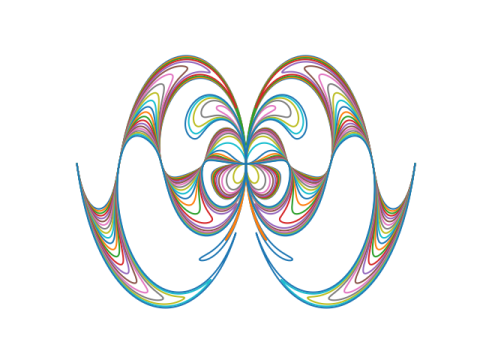 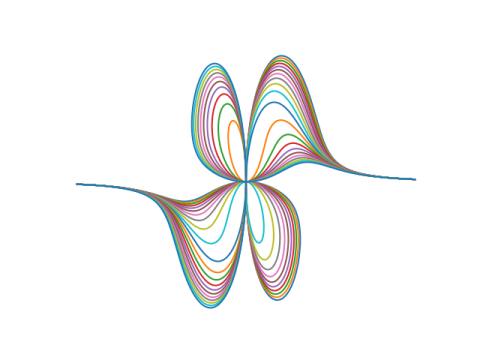 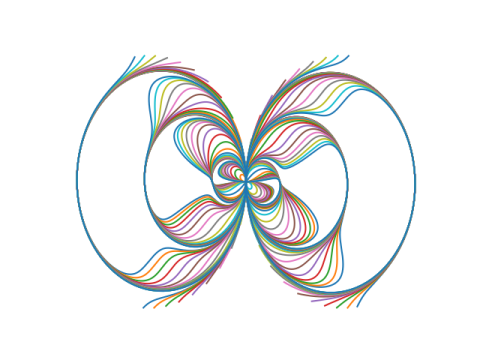 Here’s how the plots were created. For a given function f, plot the parametric curves given by

See [1] for what this has to do with circles and coordinates.

The Sketchviz site lets you enter GraphViz code and get out something that looks hand-drawn. I decided to try it on some of the GraphViz diagrams I’ve made for this blog.

Here’s a diagram from my post on Rock, Paper, Scissors, Lizard, Spock. 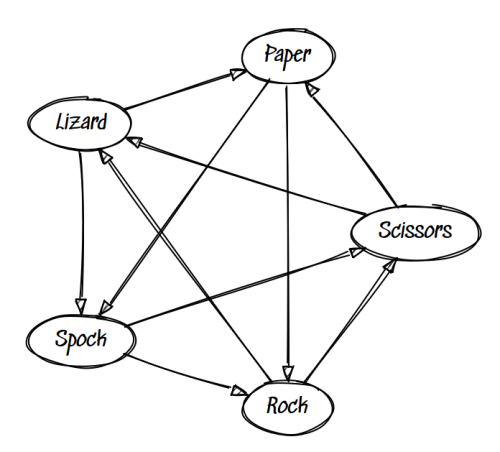 The Sketchviz site defaults to Tinos font, which does not look hand-drawn. Maybe you’d want that sometimes: neatly typeset labels and hand-drawn boxes and arrows. In my case, I thought it looked better to use Sedgwick Ave which looks closer to handwriting.

Some posts with GraphViz diagrams:

Some of these posts include GraphViz source.

Robert Bosch has a new book coming out next week titled OPT ART: From Mathematical Optimization to Visual Design. This post will look at just one example from the book: creating images of Frankenstein’s monster [1] using dominoes. 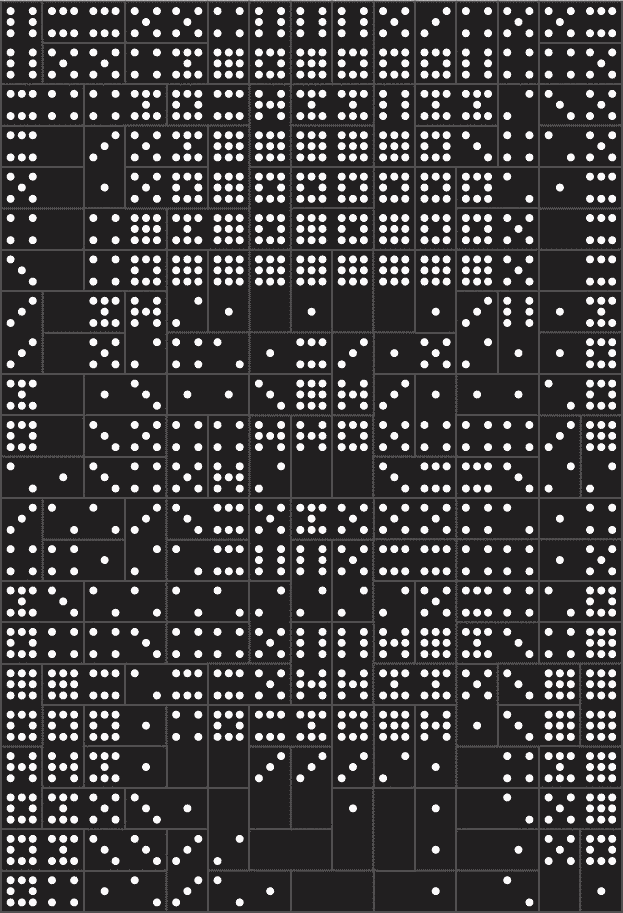 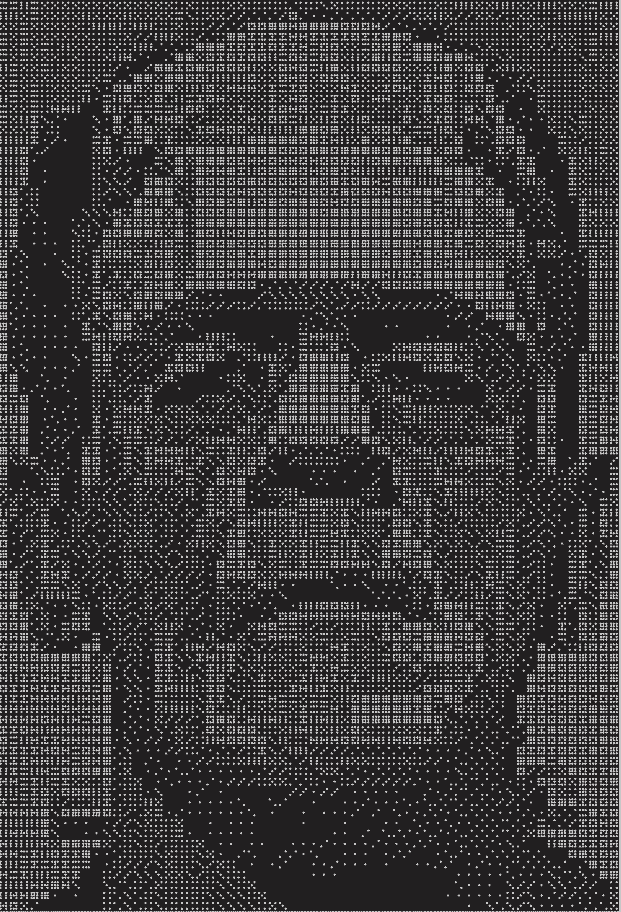 The images are created by solving a constrained optimization problem. You basically want to use dominoes whose brightness is proportional to the brightness of the corresponding section of a photograph. But you can only use the dominoes you have, and you have to use them all.

You would naturally want to use double nines for the brightest areas since they have the most white spots and double blanks for the darkest areas. But you only have three of each in the first image, forty eight of each in the second, and you have to make do with the rest of the available pieces. So you solve an optimization problem to do the best you can.

Each domino can be places horizontally or vertically, as long as they fit the overall shape of the image. In the first image, you can see the orientation of the pieces if you look closely. Here’s a little piece from the top let corner.

One double six is placed vertically in the top left. Next to it are another double six and a double five placed horizontally, etc.

There are additional constraints on the optimization problem related to contrast. You don’t just want to match the brightness of the photograph as well as you can, you also want to maintain contrast. For example, maybe a five-two domino would match the brightness of a couple adjacent squares in the photograph, but a seven-one would do a better job of making a distinction between contrasting regions of the image.

Bosch explains that the problem statement for the image using three sets of dominoes required 34,265 variables and 385 domino constraints. It was solved using 29,242 iterations of a simplex algorithm and required a little less than 2 seconds.

The optimization problem for the image created from 48 sets of dominoes required 572,660 variables and 5,335 constraints. The solution required 30,861 iterations of a simplex algorithm and just under one minute of computation. 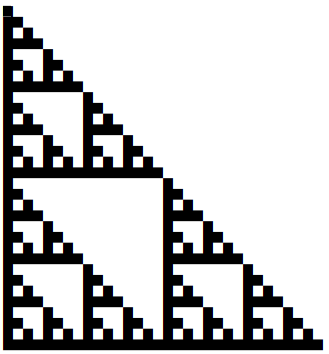 The point of the post was that the numbers that came up in yet another post made the fractal image above when you wrote them in binary. Here’s the trick I used to make that image.

To make the pattern of 0’s and 1’s easier to see, I wanted to make a graphic with black and white squares instead of the characters 0 and 1. I thought about writing a program to create an image using strings of 0’s and 1’s as input, but then I thought of something more direct.

The Unicode character U+2588 is just a solid rectangle. I replaced the 1’s with U+2588 and replaced the 0’s with spaces. So I made a text file that looked like the image above, and took a screen shot of it. The only problem was that the image was rectangular. I thought the pattern would be easier to see if it were a square, so I changed the aspect ratio on the image.

Here’s another example using Unicode block elements, this time to make a little bar graph, sorta like Edward Tufte’s idea of a sparkline. The characters U+2581 through U+2588 produce bars of increasing height.

To create images like this, your font needs to include glyphs for Unicode block elements. The font needs to be monospaced as well so the letters will line up under the blocks. The example above was created using the APL385. It also looks good in Hack and Input Mono. In some fonts the block characters don’t align consistently on the baseline.

Here’s the Python code that produced the above graph of English letter frequencies.

If you know the vertices of a polygon, how do you compute its area? This seems like this could be a complicated, with special cases for whether the polygon is convex or maybe other considerations. But as long as the polygon is “simple,” i.e. the sides meet at vertices but otherwise do not intersect each other, then there is a general formula for the area.

List the vertices starting anywhere and moving counterclockwise around the polygon: (x1, y1), (x2, y2), …, (xn, yn). Then the area is given by the formula below.

Update: Here is an analogous formula for centroid.

If you add a constant amount to each vertex, you move your polygon but you don’t change the area. So in theory it makes no difference whether you translate the polygon before computing its area. But in floating point, it can make a difference.

The cardinal rule of floating point arithmetic is to avoid subtracting nearly equal numbers. If you subtract two numbers that agree to k significant figures, you can lose up to k figures of precision. We’ll illustrate this by taking a right triangle with base 2 and height π. The area should remain π as we translate the triangle away from the origin, we lose precision the further out we translate it.

Here’s a Python implementation of the shoelace formula.

If you’re not familiar with Python, a couple things require explanation. First, range(n-1) is a list of integers starting at 0 but less than n-1. Second, the -1 index returns the last element of the array.

Now, watch how the precision of the area degrades as we shift the triangle by powers of 10.

I was looking back over an old blog post and noticed some code in the comments that I had overlooked. Tom Pollard gives the following code for drawing Spirograph-like curves.

Tom points out that with the r parameters above, this produces the default curve on Nathan Friend’s Inspirograph app.

Related: Exponential sum of the day

I was playing around with something in Mathematica and one of the images that came out of it surprised me. 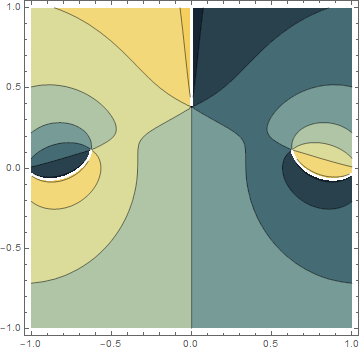 It’s a contour plot for the system function of a low pass filter. 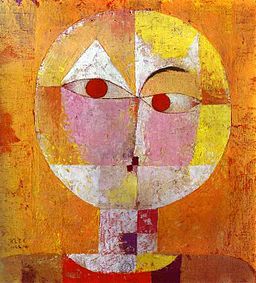 and Perry the Platypus from Phineas and Ferb. 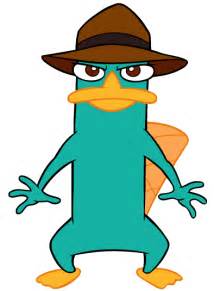 Let S be the area of triangle T in three-dimensional space. Let A, B, and C be area of the projections of T to the xy, yz, and xz planes respectively. Then

You could prove the identity above by using the fact that the area of a triangle spanned by two vectors is half the length of their cross product. Suppose a, b, and c are the locations of the three corners of T. Then

and by v2 we mean the dot product of v with itself.