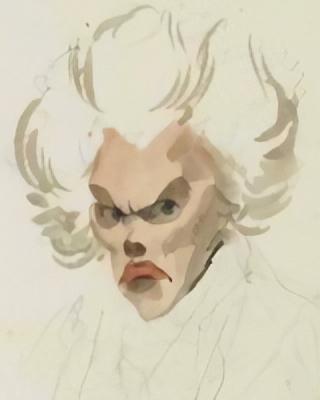 There are three fundamental kinds of elliptic integrals, and these are prosaically but unhelpfully called elliptic integrals of the first kind, the second kind, and the third kind. These names sound odd to modern ears, but it’s no different than classical musicians naming symphonies Symphony No. 1, Symphony No. 2, etc.

This post covers the classical forms of elliptic integrals dating back to Adrien-Marie Legendre (1752–1833) and the next post will cover the modern formulation by Bille Carlson (1924–2013).

This post will present Legendre’s classification theorem for elliptic integrals, but first let’s look at a few similarities between Legendre and Beethoven.

The image above is a caricature of Legendre, which is unfortunately the only image we have of him. But in this watercolor Legendre looks a little like Beethoven.

A name like “Symphony No. 5 in C minor” isn’t that descriptive. If we know the difference between Beethoven’s Symphony No. 4 and Symphony No. 5, it’s because we’ve become familiar with each symphony; the names alone aren’t significant. It’s not as if Beethoven’s fourth symphony was written in 4/4 time and his fifth in 5/4 or anything like that.

But we just accept that that’s the way classical composers named things, and we should extend the same understanding to mathematics of the same era. Legendre named his functions analogously to the way Beethoven named his symphonies.

where R is a rational function and P is a polynomial of degree three or four.

Legendre’s classification theorem says that any elliptic integral can be written as a linear combination of elementary functions and three special functions: F, E, and Π. These are the elliptic integrals of the first, second, and third kind, defined below. Said another way, you can evaluate elliiptic integrals if you add just three advanced functions—F, E, and Π— to the set of functions covered in a calculus class.

The elliptic integral of the second kind comes up in calculating the length of an elliptic arc, and the family of elliptic integrals take their name from this association. I think of E as mnemonic for “ellipse” and F as mnemonic for “first.” I don’t know whether this was the original motivation for the names. Legendre was French, and I doubt he would call a function F for “first” because the French word for “first” is première. Maybe an English speaker came up with the notation.

[1] The equation for pendulum motion that is first introduced to students makes the simplifying assumption that the displacement angle θ is so small that sin θ can be replaced with θ. In this case the motion is described by sines and cosines. But if you don’t make this assumption, then the differential equation for motion is nonlinear and its solution is an elliptic integral of the first kind.