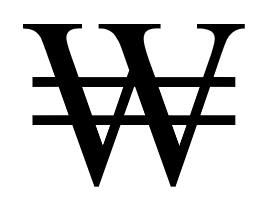 In Microsoft Word you can insert Unicode characters by typing the hex value of the character then typing Alt-x. You can also see the Unicode value of a character by placing the cursor immediately after the character and pressing Alt-x. This also works in applications that use the Windows rich edit control such as WordPad and Outlook.

Pros: Nothing to install or configure. You can see the numeric value before you turn it into a symbol. It’s handy to be able to go the opposite direction, looking up Unicode values for characters.

Cons: Does not work with many applications.

Another approach which works with more applications is as follows. First create a registry key under HKEY_CURRENT_USER of type REG_SZ called EnableHexNumpad, set its value to 1, and reboot. Then you can enter Unicode symbols by holding down the Alt key and typing the plus sign on the numeric keypad followed by the character value. When you release the Alt key, the symbol will appear. This approach worked with most applications I tried, including Firefox and Safari, but did not with Internet Explorer.

Pros: Works with many applications. No software to install.

Cons: Requires a registry edit and a reboot. It’s awkward to hold down the Alt key while typing several other keys. You cannot see the numbers you’re typing. Doesn’t work with every application.

Another option is to install the UnicodeInput utility. This worked with every application I tried, including Internet Explorer. Once installed, the window below pops up whenever you hold down the Alt key and type the plus sign on the numeric keypad. Type the numeric value of the character in the box, click the Send button, and the character will be inserted into the window that had focus when you clicked Alt-plus.

Pros: Works everywhere (as far as I’ve tried). The software is free. Easy to use.

31 thoughts on “Three ways to enter Unicode characters in Windows”