The Jacobi elliptic functions sn and cn are analogous to the trigonometric functions sine and cosine. The come up in applications such as nonlinear oscillations and conformal mapping. Unfortunately there are multiple conventions for defining these functions. The purpose of this post is to clear up the confusion around these different conventions. 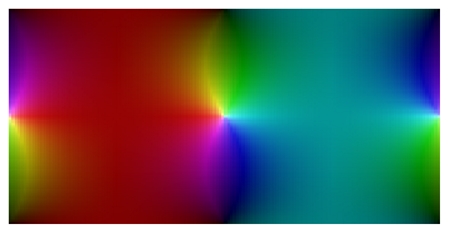 The image above is a plot of the function sn [1].

There are several ways to specify this dial. I started with the word “dial” rather than “parameter” because in this context parameter takes on a technical meaning, one way of describing the dial. In addition to the “parameter,” you could describe a Jacobi function in terms of its modulus or modular angle. This post will be a Rosetta stone of sorts, showing how each of these ways of describing a Jacobi elliptic function are related.

The modular angle α is defined by m = sin² α.

In addition to parameter, modulus, and modular angle, you’ll also see Jacobi function described in terms of K and K‘. These are called the quarter periods for good reason. The functions sn and cn have period 4K as you move along the real axis, or move horizontally anywhere in the complex plane. They also have period 4iK‘. That is, the functions repeat when you move a distance 4K‘ vertically [2].

The function K(m) is known as “the complete elliptic integral of the first kind.”

So far we’ve focused on the second input to the Jacobi functions, and three conventions for specifying it.

There are two conventions for specifying the first argument, written either as φ or as u. These are related by

The angle φ is called the amplitude. (Yes, it’s an angle, but it’s called an amplitude.)

When we said above that the Jacobi functions had period 4K, this was in terms of the variable u. Note that when φ = π/2, u = K.

The Mathematica function JacobiSN[u, m] computes the function sn with argument u and parameter m. In the notation of A&S, sn(u | m).

Similarly, JacobiCN[u, m] computes the function cn with argument u and parameter m. In the notation of A&S, cn(u | m).

We haven’t talked about the Jacobi function dn up to this point, but it is implemented in Mathematica as JacobiDN[u, m].

The function that solves for the amplitude φ as a function of u is JacobiAmplitude[um m].

The function that computes the quarter period K from the parameter m is EllipticK[m].

The SciPy library has one Python function that computes four mathematical functions at once. The function scipy.special.ellipj takes two arguments, u and m, just like Mathematica, and returns sn(u | m), cn(u | m), dn(u | m), and the amplitude φ(u, m).

[1] The plot was made using JacobiSN[0.5, z] and the function ComplexPlot described here.

2 thoughts on “Clearing up the confusion around Jacobi functions”