Here’s a plot showing sin(x) and its negative curvature.

Steven Wilkinson wrote an article [1] addressing the question of whether there is a curve so that the curvature at each point is proportional to the value of the curve. The curvature of a graph of y = y(x) is

General theory says that there should at least be a solution in a (possibly small) neighborhood of 0, but it’s not obvious a priori that interesting solutions exist. It turns out that if we pick the proportionality constant a = -1 and the initial conditions y(0) = 0 and y ‘(0) = √3 then we get a periodic solution that looks something like a sine.

The following Mathematica code will plot the function for us.

The plot looks a lot like a sine wave. In fact, I imagine that when asked to draw a sine wave, most people would draw something that looks more like this than like an actual sine wave. 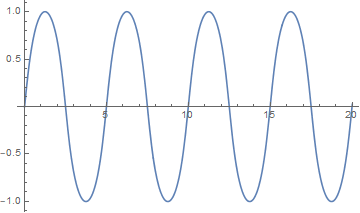