A catenary with scale a is the graph of the function

The x and the a are separated by a semicolon rather than a comma to imply that we think of x as the variable and a as a parameter.

This graph passes through the origin, i.e. for any a, f(0, a) = 0. To find the scaling parameter a we need to specify the value of f at one more point and solve f(x, a) = y. This is the equation I alluded to recently as not having a closed-form solution.

Without loss of generality, we can assume x = 1. Why is that?

if and only if

So will assume x = 1 for now and focus on solving for a value of a such that g(a) = y. But we will include Python code shortly that goes back to f, i.e. does not assume x = 1.

and so for large a,

Here are a couple plots showing how good this approximation is, even for a not that large. First, a plot of g and its approximation. 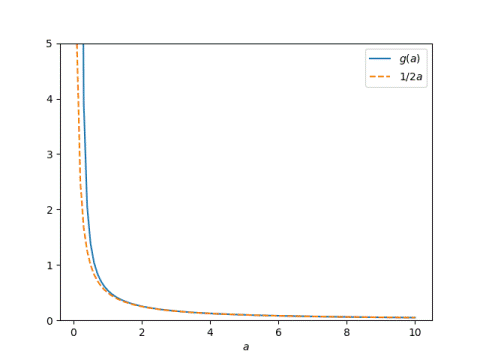 And here’s a plot of the relative error in approximating g(a) by 1/2a. 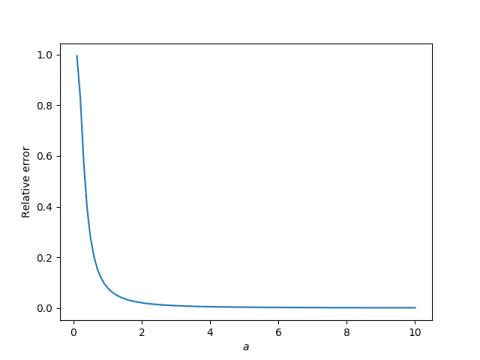 This means that for small y,

It’s fortunate that we have a convenient approximation when y is small, because in practice y is usually small: catenaries are usually wider than deep, or at least not much deeper than wide.

Since the terms in the Taylor series that we discarded are all positive, we also have a bound

If we want to solve for a numerically, 1 / 2y makes a good starting guess, and it also makes a left bracket for root-finding methods that require a bracket around the root.

Now that we can solve g(a) = y numerically, we can go back and see how far 1 / 2y is from the actual solution for varying values of y. 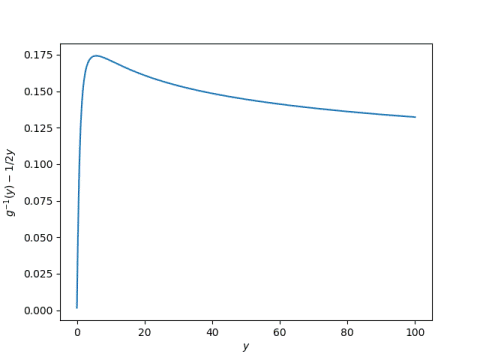 Recall that the second plot above showed that the relative error in approximating g(a) by 1 / 2a is large when a is small (and thus y is big). But the plot immediately above shows that nevertheless, 1/ 2y is a good guess at a solution to g(a) = y, never off by more than 0.175.

Recall also that we said 1 / 2y is a lower bound on the solution, and could be used as a left bracket in a root-finding method that requires a bracket. The plot above suggests that 0.18 + 1 / 2y would work as a right bracket

One thought on “Solving for the catenary scale parameter”