Imagine a spring with stiffness k1 attached to a ceiling and a mass m1 handing from the spring.

There’s a second spring attached to the first mass with stiffness k2 and a mass m2 handing from that.

If the second spring were infinitely stiff, the two masses would be joined with a rigid rod, and so the system would act like a single mass m1 + m2 hanging from the first spring. This motion would be described by the single differential equation

However, what is missing from [1] is any visualization of how the solution to the two-mass system converges to that of the combined-mass system. 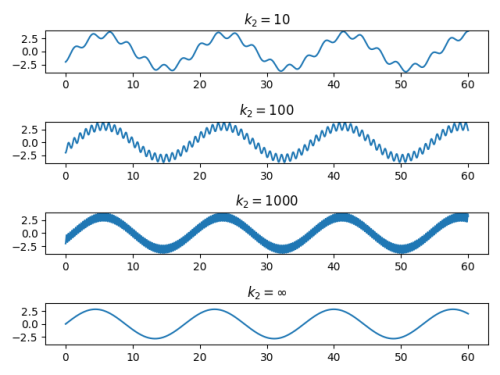 The coupled-mass system has a high-frequency component due to the oscillation of the second mass relative to the first one.

The authors in [1] show that the amplitude of the high-frequency component decays as k2 goes to infinity, though this is not apparent from the plots above. This is due to a limitation of the numerical method used to produce the plots.

The second question is more difficult and will have to wait for another post. The first question, however, we can settle fairly quickly.

The authors in [1] make the simplifying assumption that the two masses are equal to 1. They then define show that

where the d‘s are constants that depend on initial conditions but not on the spring stiffnesses. and

α4, the frequency of the low frequency component, approaches a finite limit as k2 → ∞,

α2, the frequency of the high frequency component, is approximately √(2k2) for large k2.

The amplitude of the high frequency component should be inversely proportional to its frequency.

7 thoughts on “A stiffening spring”