If you set x = 0 and compute f(x) you will get exactly 0. Apply f a thousand times and you’ll never get anything but zero.

But this does not mean 0 is a stable attractor, and in fact it is not stable.

It’s easy to get mathematical stability and numerical stability confused, because the latter often illustrates the former. In this post I point out that the points on a particular unstable orbit cannot be represented exactly in floating point numbers, so iterations that start at the floating  point representations of these points will drift away.

In the example here, 0 can be represented exactly, and so we do have a computationally stable fixed point. But 0 is not a stable fixed point in the mathematical sense. Any starting point close to 0 but not exactly 0 will eventually go all over the place.

If we start at some very small ε > 0, then f(ε) ≈ 4ε. Every iteration multiplies the result by approximately 4, and eventually the result is large enough that the approximation no longer holds.

If we were to plot this, we wouldn’t see any movement. But by the time we iterate our function 200 times, the result is chaotic. I get the following: 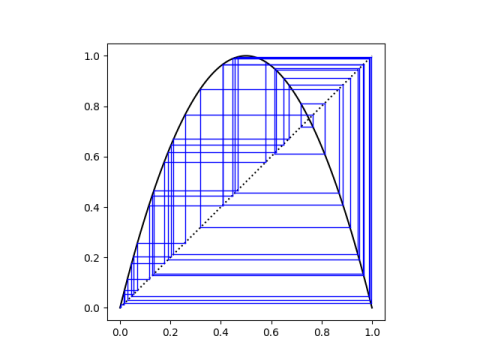