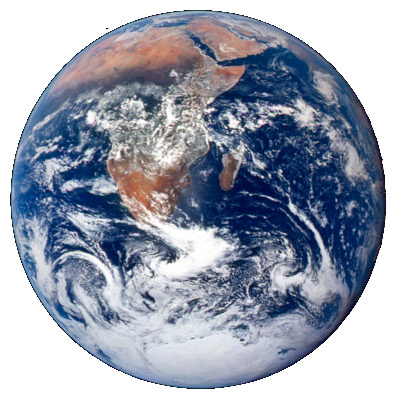 Pick three cities and form a spherical triangle by connecting each pair of cities with the shortest arc between them. How might you find the area of this triangle?

For this post, I’ll assume the earth is perfectly spherical. (Taking into account that the earth is slightly oblate makes the problem much more complicated. Maybe a post for another time.)

If we measure spherical excess E in radians, then the area of a spherical triangle is

where R is the radius of the sphere. This remarkable theorem was discovered by Thomas Harriot in 1603.

Let’s go back to the example above of a triangle running from the north pole to two points 90° apart on the equator. This triangle takes up 1/8 of the earth’s surface, and area of the earth is 4πR², and so the triangle has area πR²/2. In this case the spherical excess E was π/2, and so we could have come to the same result by multiplying E by R².

We can find the area of a spherical triangle by measuring the angle of arcs between pairs of points. We’ll compute area assuming the sphere has radius 1. (Otherwise temporarily assume radius 1 and then multiply by R² when we’re done.)

The previous post explains how to find a parameterization for the great circle connecting points on a sphere. We can take derivatives to find tangent vectors where the great circles intersect, and compute the angle between these tangents to find the interior angles of our triangles.

parameterizes a great circle including A and B. This curve passes through A at time t = 0 with velocity

and so this gives us a tangent vector at A in the direction of B. Repeat the exercise for a great circle between A and C. Then the cosine of the angle of intersection is the two normalized tangent vectors. We can thus obtain all the interior angles, and from there we can compute the spherical excess and thus the area of the spherical triangle.

2 thoughts on “A tale of three cities”