A repunit is a number whose base 10 representation consists entirely of 1s. The number consisting of n 1s is denoted Rn.

Here is the announcement. The date posted at the top of the page is from March this year, but I believe the announcement is new. Maybe the author edited an old page and didn’t update the shown date.

Incidentally, I noticed a lot of repunits when I wrote about bad passwords a few days ago. That post explored a list of commonly used but broken passwords. This is the list of passwords that password cracking software will try first. The numbers Rn are part of the list for the following values of n:

So 46 is the smallest value of n such that Rn is not on the list. I would not recommend using R46 as a password, but surprisingly there are a lot of worse choices.

The bad password file is sorted in terms of popularity, and you might expect repunits to appear in the file in order, i.e. shorter sequences first. That is sorta true overall. But you can see streaks in the plot below showing multiple runs where longer passwords are more common than shorter passwords. 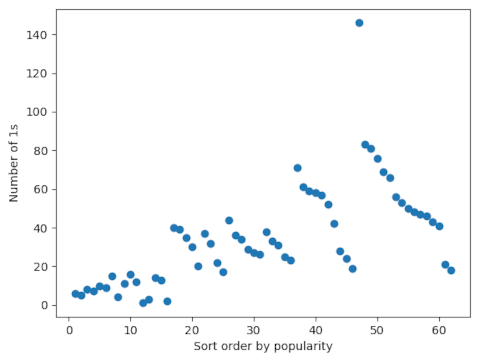 One thought on “Repunits: primes and passwords”