This is not to say that MWC is the best generator for every purpose, but any shortcomings of MWC are not apparent from DIEHARDER. The PCG family of generators, for example, is apparently superior to MWC, but you couldn’t necessarily conclude that from these tests.

Unless your application demands more of a random number generator than these tests do, MWC is probably adequate for your application. I wouldn’t recommend it for cryptography or for high-dimensional integration by darts, but it would be fine for many common applications.

George Marsaglia developed the DIEHARD battery of tests in 1995. Physics professor Robert G. Brown later refined and extended Marsaglia’s original test suite to create the DIEHARDER suite. (The name of Marsaglia’s battery of tests was a pun on the Diehard car battery. Brown continued the pun tradition by naming his suite after Die Harder, the sequel to the movie Die Hard.) The DIEHARDER suite is open source. It is designed to be at least as rigorous as the original DIEHARD suite and in some cases more rigorous.

There are 31 distinct kinds of tests in the DIEHARDER suite, but some of these are run multiple times. In total, 114 tests are run.

The main strength of Marsaglia’s MWC algorithm is that it is very short. The heart of the code is only three lines:

You can find a full implementation of a random number generator class based in MWC here.

The heart of PCG is also very short, but a bit more mysterious.

(These are the 64-bit state versions of MWC and PCG. Both have versions based on larger state.)

Because these generators require little code, they’d be relatively easy to step into with a debugger, compared to other RNGs such as Mersenne Twister that require more code and more state.

Out of the 114 DIEHARDER tests run on MWC, all but three returned a pass, and the rest returned a weak pass.

A few weak passes are to be expected. The difference between pass, weak pass, and failure is whether a p-value falls below a certain threshold. Theory says that ideally p-values would uniformly distributed, and so one would fall outside the region for a strong pass now and then.

Rather than counting strong and weak passes, let’s look at the p-values themselves. We’d expect these to be uniformly distributed. Let’s see if they are.

Here are the p-values reported by the DIEHARDER tests for MWC: 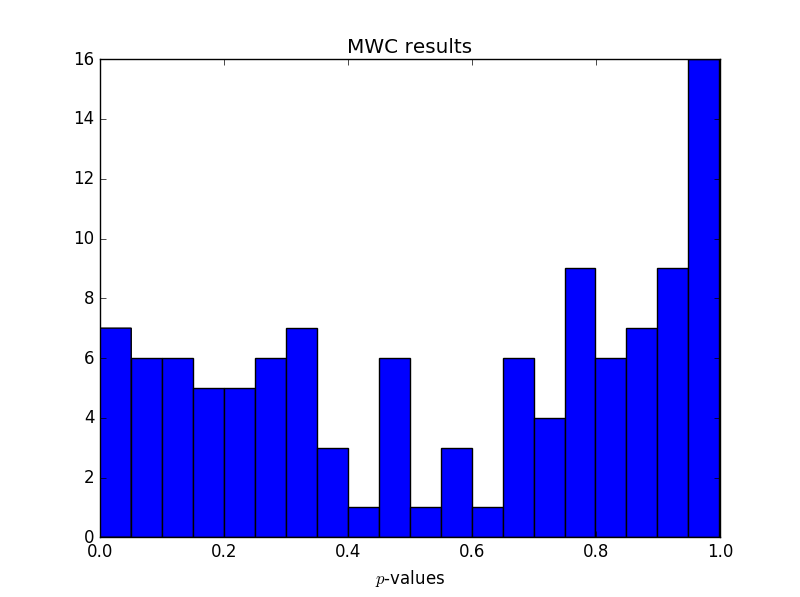 Here are the corresponding values for PCG: 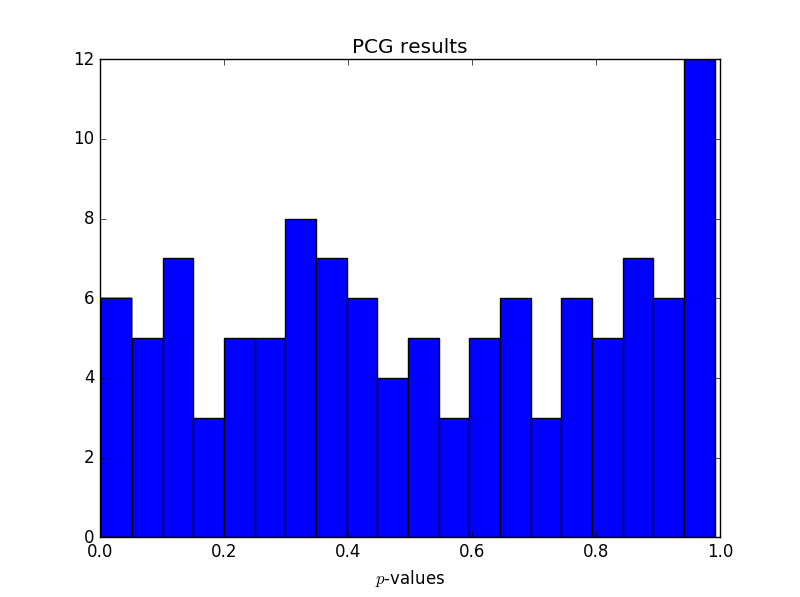 But both sets of test results have a surprising number of large p-values. Not sure what to make of that. I suspect it says more about the DIEHARDER test suite than the random number generators being tested.

Update: I went back to look at some results from Mersenne Twister to see if this pattern of large p-values persists there. It does, and in fact the p-values are even more biased toward the high end for Mersenne Twister. 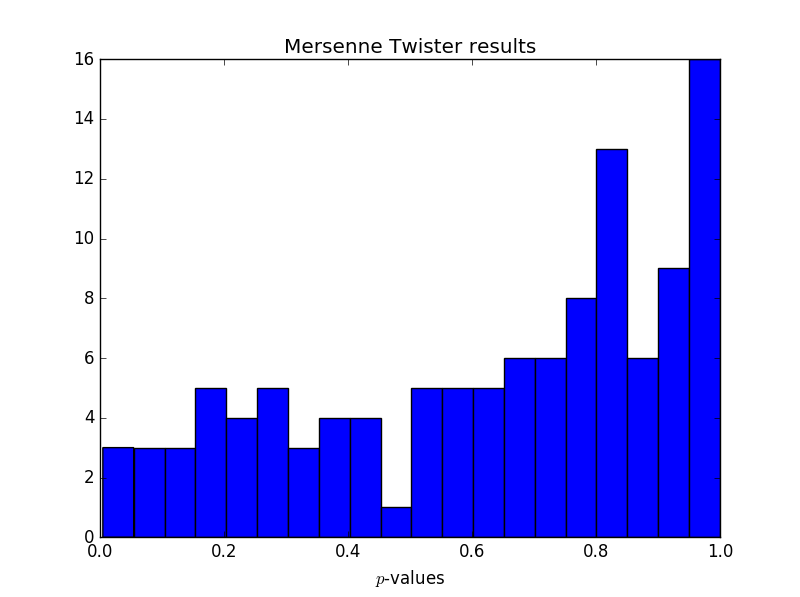 One thing I noticed is that the large p-values are disproportionately coming from some of the same tests each time. In particular, the repetitions of thests_serial test have an unexpectedly high number of large p-values for each generator.

If you’d like someone to run DIEHARDER or other RNG test suites, let’s talk. We have run these tests for other clients and we’d be glad to run them for you.