When mathematicians run out of symbols, they turn to other alphabets. Most math symbols are Latin or Greek letters, but occasionally you’ll run into Russian or Hebrew letters.

Sometimes math uses a new font rather than a new alphabet, such as Fraktur. This is common in Lie groups when you want to associate related symbols to a Lie group and its Lie algebra. By convention a Lie group is denoted by an ordinary Latin letter and its associated Lie algebra is denoted by the same letter in Fraktur font. 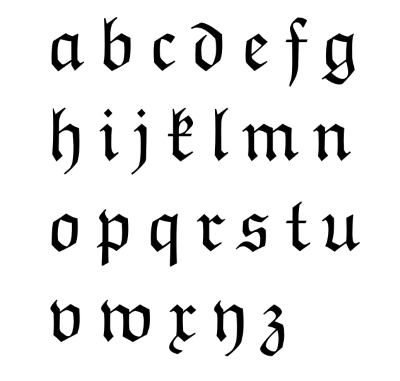 To produce Fraktur letters in LaTeX, load the amssymb package and use the command \mathfrak{}.

Symbols such as \mathfrak{A} are math symbols and can only be used in math mode. They are not intended to be a substitute for setting text in Fraktur font. This is consistent with the semantic distinction in Unicode described below.

The Unicode standard tries to distinguish the appearance of a symbol from its semantics, though there are compromises. For example, the Greek letter Ω has Unicode code point U+03A9 but the symbol Ω for electrical resistance in Ohms is U+2621 even though they are rendered the same [1].

The letters a through z, rendered in Fraktur font and used as mathematical symbols, have Unicode values U+1D51E through U+1D537. These values are in the “Supplementary Multilingual Plane” and do not commonly have font support [2].

The corresponding letters A through Z are encoded as U+1D504 through U+1D51C, though interestingly a few letters are missing. The code point U+1D506, which you’d expect to be Fraktur C, is reserved. The spots corresponding to H, I, and R are also reserved. Presumably these are reserved because they are not commonly used as mathematical symbols. However, the corresponding bold versions U+1D56C through U+ID585 have no such gaps [3].

[1] At least they usually are. A font designer could choose provide different glyphs for the two symbols. I used the same character for both because some I thought some readers might not see the Ohm symbol properly rendered.

I can see these symbols from my desktop and from my iPhone, but not from my Android tablet. Same with the symbols below.

6 thoughts on “Fraktur symbols in mathematics”