(Note that it’s Heaps’ law, not Heap’s law. The law is named after Harold Stanley Heaps. However, true to Stigler’s law of eponymy, the law was first observed by someone else, Gustav Herdan.)

I’ll demonstrate Heaps’ law looking at books of the Bible and then by looking at novels of Jane Austen. I’ll also look at unique words, what linguists call “hapax legomena.”

For a collection of related texts, you can estimate the parameters K and β from data. I decided to see how well Heaps’ law worked in predicting the number of unique words in each book of the Bible. I used the King James Version because it is easy to download from Project Gutenberg.

I converted each line to lower case, replaced all non-alphabetic characters with spaces, and split the text on spaces to obtain a list of words. This gave the following statistics:

The parameter values that best fit the data were K = 10.64 and β = 0.518, in keeping with the typical ranges of these parameters.

Here’s a visual representation of the results. 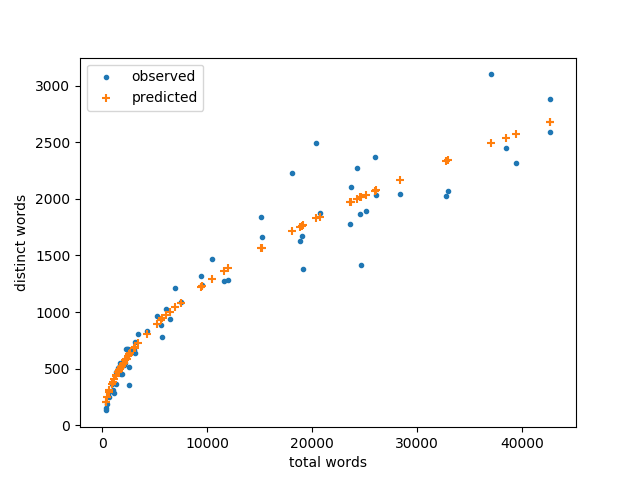 It looks like the model is more accurate for small books, and that’s true on an absolute scale. But the relative error is actually smaller for large books as we can see by plotting again on a log-log scale. 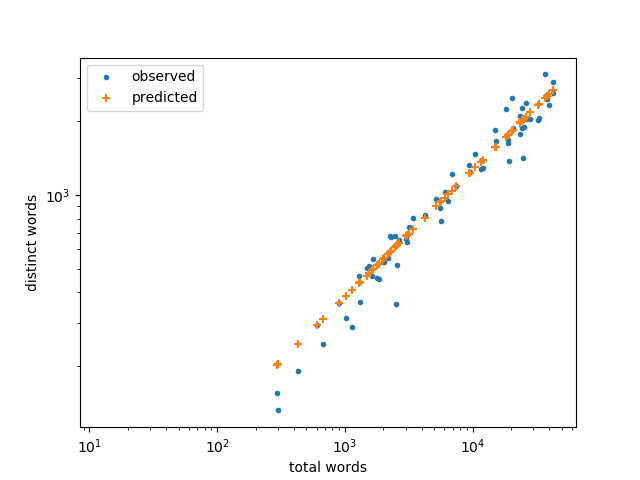 I expect Heaps’ law would fit more closely if you looked at, say, all the novels by a particular author, especially if the author wrote all the books in his or her prime. (I believe I read that someone did a vocabulary analysis of Agatha Christie’s novels and detected a decrease in her vocabulary in her latter years.)

To test this out I looked at Jane Austen’s novels on Project Gutenberg. Here’s the data:

Here’s a comparison of the actual and predicted vocabulary sizes in the novels.

If a suspected posthumous manuscript of Jane Austen were to appear, a possible test of authenticity would be to look at its vocabulary size to see if it is consistent with her other works. One could also look at the number of words used only once, as we discuss next.

In linguistics, a hapax legomenon is a word that only appears once in a given context. The term comes from a Greek phrase meaning something said only once. The term is often shortened to just hapax.

I thought it would be interesting to look at the number of hapax legomena in each book since I could do it with a minor tweak of the code I wrote for the first part of this post.

Normally if someone were speaking of hapax legomena in the context of the Bible, they’d be looking at unique words in the original languages, i.e. Hebrew and Greek, not in English translation. But I’m going with what I have at hand. 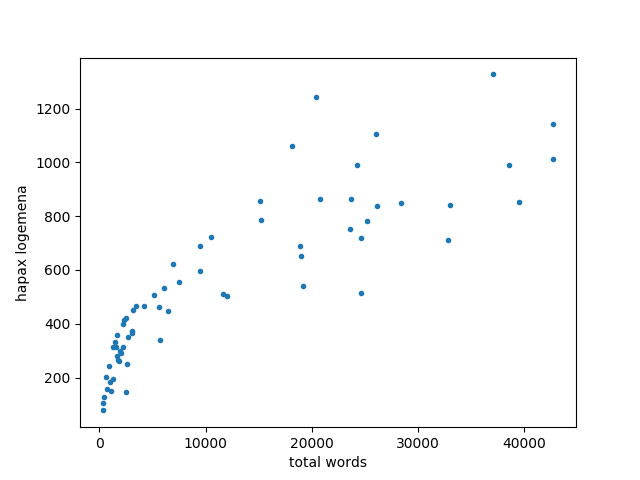 This looks a lot like the plot of vocabulary size and total words, suggesting the number of hapax also follow a power law like Heaps law. This is evident when we plot again on a logarithmic scale and see a linear relation. 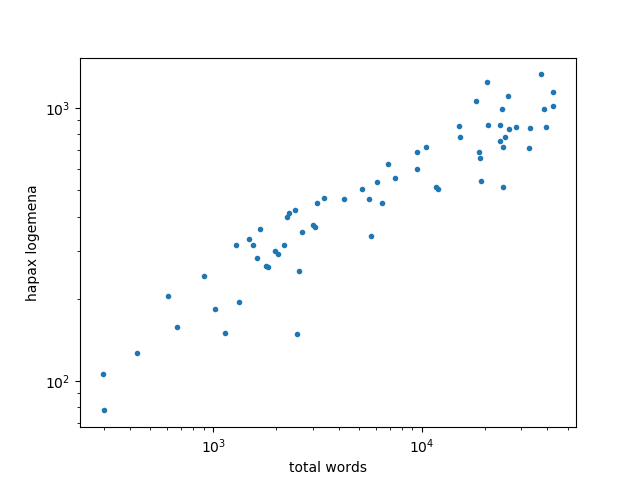 Just to be clear on the difference between two analyses this post, in the first we looked at vocabulary size, the number of distinct words in each book. In the second we looked at words that only appear once. In both cases we’re counting unique words, but unique in different senses. In the first analysis, unique means that each word only counts once, no matter how many times it’s used. In the second, unique means that a work only appears once.