I’ve mostly used Windows and Linux for the last several years. When I needed to get a new laptop recently I got a MacBook Pro. I’ve used a Mac before, but it’s been a while, and so I’m starting over.

I can move between Windows and Linux and almost forget what OS I’m using because keyboard shortcuts work the same way. But MacOS is substantially different. I’m trying to find a way to remap the modifier keys on my Mac so that my muscle memory still works on the new laptop.

There are two difficulties: where the keys are located, and what the keys do. I’ll explain why I distinguish these.

I use Emacs, which means I use the Control key (⌃) a lot. So the first thing I did was swap Caps Lock and Control. Now when I use the-key-formerly-known-as-caps-lock it behaves as I expect, on Linux, Windows, and Mac. Similarly, I swapped the Option (⌥) and Command (⌘) keys so that the-key-next-to-the-spacebar acts the same on all three operating systems.

I’m trying to customize my OS configurations and habits in order to bring my use of three operating systems closer together. Here’s what I’ve come up with so far, and I welcome your suggestions. 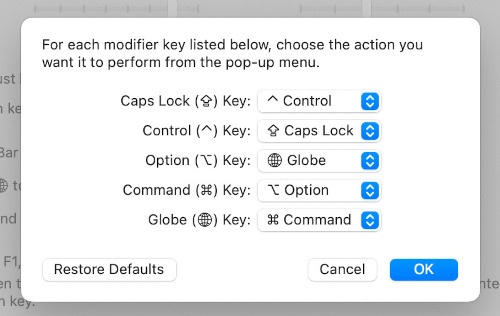 Now the key in the lower left corner of the keyboard acts the same across operating systems. Holding down that key and pressing C copies etc. On my Mac, this key is labeled with a globe icon, and on my other machines it’s labeled Ctrl. But I type by feel, not by sight, and when I reach for this key it does what I expect. However, I do have to keep in mind that the functionality of the Command key on MacOS is not exactly the same as the functionality of the Control key on Windows and Linux.

Now on Linux I have two left Control keys, one in the bottom left corner as discussed above, and one labeled “Caps Lock.” I could use either one anywhere, but I’m getting in the habit of using the former Caps Lock as the control key when using Emacs and using the key in the lower left as the control key everywhere else. That way my keyboard mostly does what I expect across platforms.

There’s a simple pattern I didn’t realize until after I posted this article:

For example, Control-B moves backward, as in Emacs, and Command-B makes text bold, like Control-B on Windows.