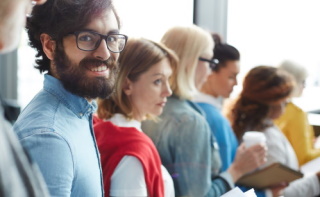 Queueing theory is the study of waiting in line. That may not sound very interesting, but the subject is full of surprises. For example, when a server is near capacity, adding a second server can cut backlog not just in half but by an order of magnitude or more. More on that here.

In this post, I’m not going to look at the content of queueing theory but just the name. When seeing the word queueing, many people assume it is misspelled and want to replace it with queuing. As I write this, my spell checker is recommending that change. But the large majority of people in the field call their subject queueing theory.

Queueing has five consecutive vowels. Are there any other English words with so many vowels in a row? To find out, I did an experiment like the classic examples from Kernighan and Pike demonstrating regular expressions by searching a dictionary for words with various patterns.

The first obstacle I ran into is that apparently Ubuntu doesn’t come with a dictionary file. However this post explains how to install one.

Now, to find all words with five consecutive vowels, I ran this:

and got back only one result: queueing. So at least in this dictionary of 101,825 words, the only word with five (or more) consecutive vowels is queueing.

Out of curiosity I checked how many words have at least four consecutive vowels. The command

returns 40, and the corresponding command with the file american-english returns 39. So both dictionaries contain 39 words with exactly four vowels in a row and no more. But are they the same 39 words? In fact they are. And one of the words is queuing, and so apparently that is an acceptable spelling in both American and British English. But as a technical term in mathematics, the accepted spelling is queueing.

Some of the 39 words are plurals or possessives of other words. For example, the list begins with Hawaiian, Hawaiian’s, and Hawaiians. (Unix sorts capital letters before lower case letters.) After removing plurals and possessives, we have 22 words with four consecutive vowels:

It’s interesting that three of the words are related to Hawaii: Kuaui is an Hawaiian island and Kulauea is a Hawaiian volcano.

I’d never heard of Quaoar before. It’s a Kuiper belt object about half the size of Pluto.

There’s a branch of math that studies how people wait in line: queueing theory. It’s not just about people standing in line, but about any system with clients and servers.

An introduction to queueing theory, about what you’d learn in one or two lectures, is very valuable for understanding how the world around you works. But after a brief introduction, you quickly hit diminishing return on your effort, unless you want to specialize in the theory or you have a particular problem you’re interested in.

The simplest models in queueing theory have nice closed-form solutions. They’re designed to be easy to understand, not to be highly realistic in application. They make simplifying assumptions, and minor variations no longer have nice solutions. But they make very useful toy models.

One of the insights from basic queueing theory is that variability in arrival and service times matters a great deal. This is unlike revenue, for example, where you can estimate total revenue simply by multiplying the estimated number of customers by the estimated average revenue per customer.

A cashier who can handle a stream of customers on average could be in big trouble. If customers arrived at regular intervals and all required the same amount of time to serve, then if things are OK on average, they’re OK. But if there’s not much slack, and there’s the slightest bit of variability in arrival or service times, long lines will form.

I work through a specific example here. The example also shows that when a system is near capacity, adding a new server can make a huge improvement. In that example, going from one server to two doesn’t just cut the waiting time in half, but reduces it by a couple orders of magnitude.

As I mentioned at the beginning, queueing theory doesn’t just apply to shoppers and cashiers. It also applies to diverse situations such as cars entering a highway and page requests hitting a web server. See more on the latter here.

Joel Spolsky of Joel on Software fame mentions queueing theory in the latest StackOverflow podcast. He mentions a rule of thumb that wait times go up quickly as server utilization exceeds 80%. The same principle applies whether you’re talking about computer servers or human servers. I hadn’t heard of that rule of thumb, though I knew that you don’t want anywhere near 100% utilization. Here’s the graph that justifies Joel’s remark.

The vertical axis is wait time. The horizontal access is utilization.

Here are the details. Basic queuing theory assumes customer arrivals are Poisson distributed with rate λ. Service times are exponentially distributed with rate μ. The ratio λ/μ is called utilization ρ. If this ratio is greater than 1, that says customers are arriving faster than they can be served, and so the line will grow without bound. If the ratio is less than 1, the line will reach some steady state on average.

Related post: What happens when you add a new teller? 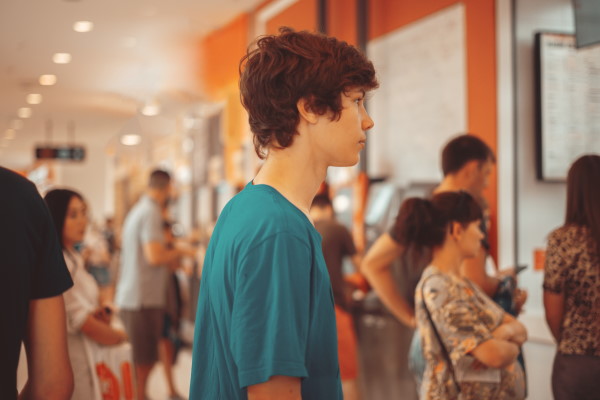 Suppose a small bank has only one teller. Customers take an average of 10 minutes to serve and they arrive at the rate of 5.8 per hour. What will the expected waiting time be? What happens if you add another teller?

We assume customer arrivals and customer service times are random (details later). With only one teller, customers will have to wait nearly five hours on average before they are served. But if you add a second teller, the average waiting time is not just cut in half; it goes down to about 3 minutes. The waiting time is reduced by a factor of 93x.

Why was the wait so long with one teller? There’s not much slack in the system. Customers are arriving every 10.3 minutes on average and are taking 10 minutes to serve on average. If customer arrivals were exactly evenly spaced and each took exactly 10 minutes to serve, there would be no problem. Each customer would be served before the next arrived. No waiting.

The service and arrival times have to be very close to their average values to avoid a line, but that’s not likely. On average there will be a long line, 28 people. But with a second teller, it’s not likely that even two people will arrive before one of the tellers is free.

Here are the technical footnotes. This problem is a typical example from queuing theory. Customer arrivals are modeled as a Poisson process with λ = 5.8/hour. Customer service times are assumed to be exponential with mean 10 minutes. (The Poisson and exponential distribution assumptions are common in queuing theory. They simplify the calculations, but they’re also realistic for many situations.) The waiting times given above assume the model has approached its steady state. That is, the bank has been open long enough for the line to reach a sort of equilibrium.

Queuing theory is fun because it is often possible to come up with surprising but useful results with simple equations. For example, for a single server queue, the expected waiting time is λ/(μ(μ – λ)) where λ the arrival rate and μ is the service rate. In our example, λ = 5.8 per hour and μ = 6 per hour. Some applications require more complicated models that do not yield such simple results, but even then the simplest model may be a useful first approximation.