Retiring professor Leonard Fabiano contacted me looking to give away a set of technical books, mostly chemical engineering books. If you’re interested please email him at lenfab@live.com.

Here are the books: 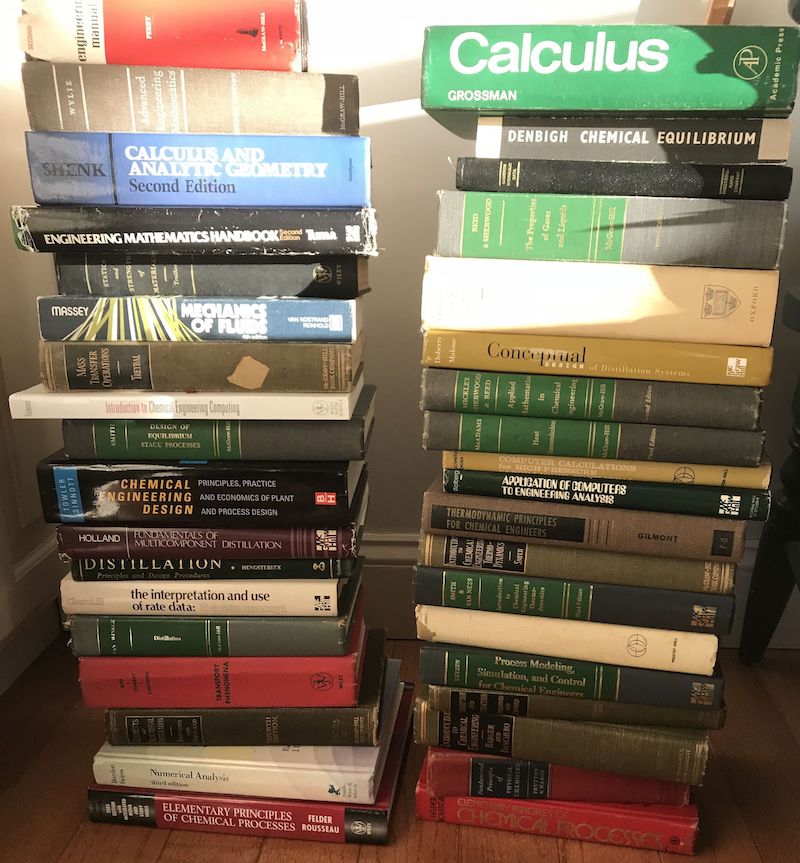 Click on the image to see a larger version.

Two titles are not possible to read in the photo. These are

In one section of his book The Great Good Thing, novelist Andrew Klavan describes how he bluffed his way through high school and college, not reading anything he was assigned. He doesn’t say what he majored in, but apparently he got an English degree without reading a book. He only tells of one occasion where a professor called his bluff.

Even though he saw no value in the books he was assigned, he bought and saved every one of them. Then sometime near the end of college he began to read and enjoy the books he hadn’t touched.

I wanted to read their works now, all of them, and so I began. After I graduated, after Ellen and I moved together to New York, I piled the books I had bought in college in a little forest of stacks around my tattered wing chair. And I read them. Slowly, because I read slowly, but every day, for hours, in great chunks. I pledged to myself I would never again pretend to have read a book I hadn’t or fake my way through a literary conversation or make learned reference on the page to something I didn’t really know. I made reading part of my daily discipline, part of my workday, no matter what. Sometimes, when I had to put in long hours to make a living, it was a real slog. …

There came a day when I was in my early forties … when it occurred to me that I had done what I set out to do. …

Against all odds, I had managed to get an education.

Yesterday I got a review copy of The Power of Networks. There’s some math inside, but not much, and what’s there is elementary.

I’d say it’s not a book about networks per se but a collection of topics associated with networks: cell phone protocols, search engines, auctions, recommendation engines, etc. It would be a good introduction for non-technical people who are curious about how these things work. More technically inclined folks probably already know much of what’s here.

The Latin phrase memento mori means “remember that you must die.” It has been adopted into English to refer to an object that serves as a reminder of death, especially a skull. This is a common theme in art, such as Albrecht Dürer’s engraving St. Jerome in His Study. I keep a copy of the book Inside OLE as a sort of technological memento mori. At some point in the 1990’s I thought OLE was the way of the future. My professional development as a programmer would be complete once I mastered OLE, and this book was the way to get there.

Most of you probably have no idea what OLE is, which is kinda my point. It stands for Object Linking and Embedding, a framework that began at Microsoft in 1990. It was a brilliant solution to the problems it was designed to address, given the limitations of its time. Today it seems quaint. Now I’m doubly removed from OLE: hardly any Windows software developers think about OLE, and I hardly think about Windows development. The thing I was anxious to understand deeply was irrelevant to me a few years later.

Despite my one-time infatuation with OLE, throughout my career I have mostly focused on things that will last. In particular, I’ve focused more on mathematics than technology because the former has a longer shelf life. As I quipped on Twitter one time, technology has the shelf life of bread, but mathematics has the shelf life of honey. Still, man does not live by honey alone. We need bread too, even if it only lasts a day.

I like science fiction as a genre, but I dislike most science fiction books I’ve tried. I start with books that come highly recommended and give up on most of them. But here are a few I’ve read and enjoyed.

I just started reading Frequency Analysis, Modulation and Noise by Stanford Goldman. The writing is strikingly elegant and clear. Here is a paragraph from the introduction.

Rigorous mathematics has a rightful place of honor in human thought. However, it has wisely been said that vigor is more important than rigor in the use of mathematics by the average man. In the particular case of this volume, the amount of rigor will be used that is necessary for a thorough understanding of the subject at hand by a radio engineer; but when it appears that rigor will confuse rather than clarify the subject for an engineer, we shall trust in the correctness of the results established by rigorous methods by the pure mathematicians and use them without the background of a rigorous proof.

The back of the book says  “Professor Goldman’s exposition is both mathematically and physically enlightening and it is unusually well written.” So far I agree.

(I found the 1967 Dover paperback reprint of the original 1948 hardback at a used book store. I looked at Dover’s site while writing this and it doesn’t seem to be in print.)

Here are some of the non-technical books I’ve mentioned in blog posts this year. I posted the technical list a couple days ago.

Maybe I should say “less technical” rather than “non-technical.” For example, Surely You’re Joking, Mr. Feynman is a book about a physicist, but it’s at least as much a human interest book as a science book.

Here are some of the books I’ve mentioned in blog posts this year. One of these books may be just the present for a geek in your life.

You’ve probably heard someone ask someone else what books they would take to a deserted island. It’s usually implied that you’re bringing books for pleasure, not books that would help you survive on the island or leave it.

I think of books that I could only read on a desert island, books that I’ve enjoyed in small portions but ordinarily would not have the patience to read cover-to-cover. For example, I’ve found portions of Donald Knuth’s series The Art of Computer Programming enjoyable and useful, but I can’t say I’ve read it all. Perhaps on a deserted island with little to do and few distractions I’d enjoy going through it carefully line by line, attempting all the exercises. I might even learn MMIX, something I can’t imagine doing under ordinary circumstances.

Along those lines, I might want to take some works by Thomas Aquinas such as his Summa Theologica or his commentaries on Aristotle. The little I’ve read of Aquinas has been profound, and more approachable than I expected. Still, I find it hard to read much of him. Alone on an island I might take the time to read him carefully.

For science, I’d take Gravitation by Misner, Thorne, and Wheeler. I’ve intended to read that book for many years and have started a couple times. In college I couldn’t afford this price; now I can’t afford the time.

For fiction, I’d take Patrick O’Brian’s Aubrey/Maturin series because I haven’t read it, I’ve heard it is very well written, and it’s long.

From The Book of Strange New Things:

… I said that if science could come up with something like the Jump it could surely solve a problem like that. Severin seized hold of that word, “science.” Science, he said, is not some mysterious larger-than-life force, it’s just the name we give to bright ideas that individual guys have when they’re lying in bed at night, and that if the fuel thing bothered me so much, there was nothing stopping me from having a bright idea to solve it …