A straight line on a globe is an arc of a great circle, the shortest path between two points. When projected onto a map, a straight path looks curved. Here’s an image I made for a post back in August.

If you were flying from Quito to Jerusalem and saw this flight plan, you might ask “Why aren’t we flying straight there, cutting across Africa rather than making a big arc around it? Are we trying to avoid flying over the Sahara?”

But the path from Quito to Jerusalem is straight, on a globe. It’s just not straight on the map. The map is not the territory.

Now let’s look at things from the opposite direction. What do straight lines on a map look like on a globe? By map I mean a Mercator projection. You could take a map and draw a straight line from Quito to Jerusalem, and it would cross every meridian at the same angle. A pilot could fly from Quito to Jerusalem along such a path without ever changing bearing. But the plane would have to turn continuously to stay on such a bearing, because this is not a straight line.

A straight line on a Mercator projection is a spiral on a globe, known as a loxodrome or a rhumb line. If a plane flew on a constant bearing from Quito but few over Jerusalem and kept going, it would spiral toward the North Pole. It would keep circling the earth, crossing the meridian through Jerusalem over and over, each time at a higher latitude. On a polar projection map, the plane’s course would be approximately a logarithmic spiral. The next post goes into this in more detail. 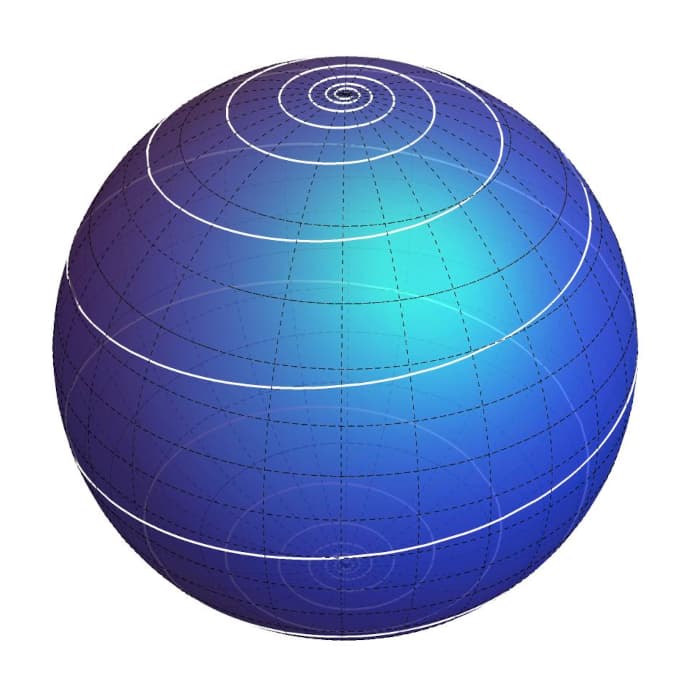 I made the image above using the Mathematica code found here.