Solutions to the non-linear differential equation

are chaotic. It’s more common to see plots of chaotic systems in the time domain, so I wanted to write a post looking at the power spectrum in the frequency domain.

The following plot was created by solving the equation above over the time interval [0, 256] at 1024 points, i.e. sampling the solution at 4 Hz. I then took the FFT and multiplied it by its conjugate to get the power spectrum. Then I took the log base 10 and multiplied by 10 to convert to decibels. 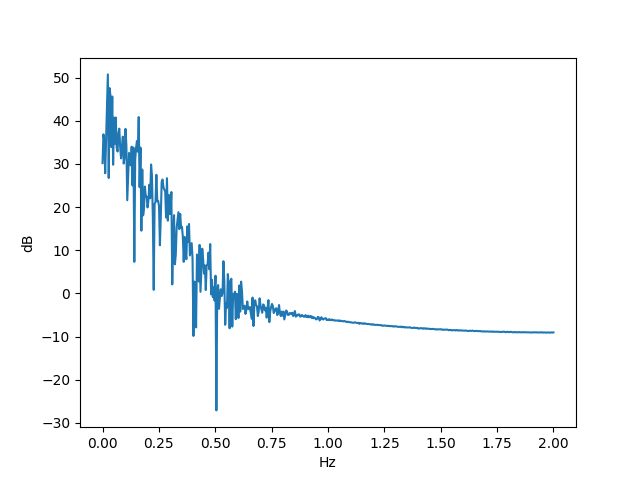 By contrast, if we look at the linear equation

and compute the power spectrum, we get 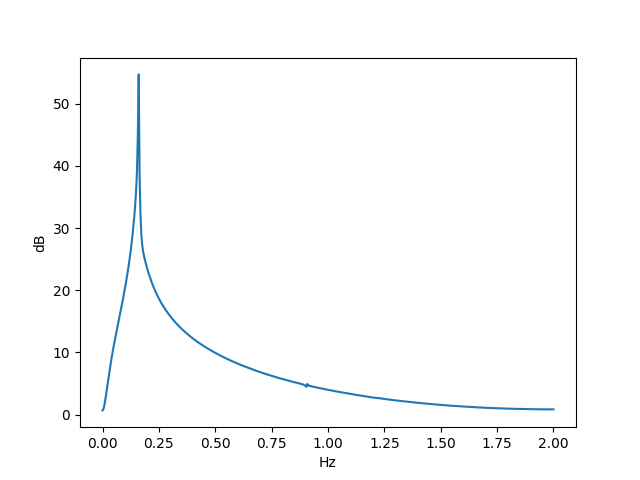 As is often the case, a small change to the form of a differential equation made a huge change in its behavior.

The power spectrum is more than just a spike because there is also an exponentially decaying transient component to the solution.

For more on steady-state and transient components of the solution, see Damped, driven oscillations.

Yesterday I said that Lyapunov exponents can’t be calculated exactly except in the case of toy problems. One such toy model is the tent map.

The graph of function on the right hand side looks a tent. It’s zero at x = 0 and at x = 1 and rises to a height of r in the middle. The Lyapunov exponent of this system has been calculated [1] to be

For r < 1/2 the Lyapunov exponent is negative and the system is stable.

For r > 1/2 the Lyapunov exponent is positive and the system is chaotic. The larger r is, the faster uncertainty in the future values of x grows. In fact the uncertainty grows in proportion to (2r)n.

Suppose r = 1 and we know the floating point representation of x0. Suppose we compute the iterations of the tent map exactly. There is no rounding error, and the only uncertainty comes from the initial uncertainty in x0. Assuming we’re using an IEEE 754 double precision number, our initial uncertainty is 2-53. (See details here.)

We lose one bit of precision in the value of x at each iteration. After 53 iterations, we’ve lost all information: the true value of x53 could be anywhere in [0, 1], and our calculated value gives us no clue where in the interval x actually is. 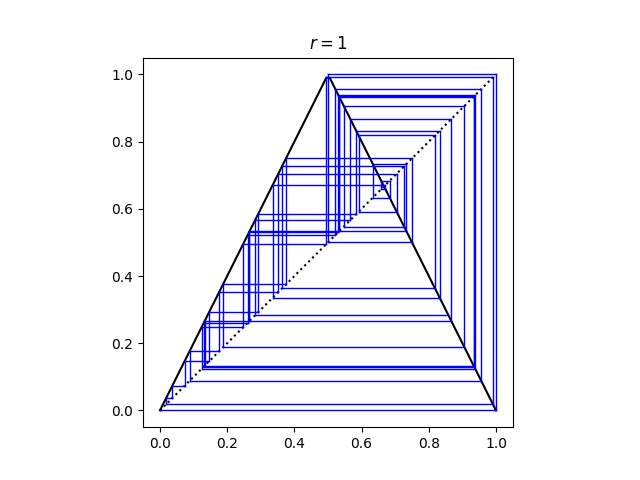 The solid black lines are the tent map. Vertical lines connect each iterate to its next value. Horizontal lines bring each iterate back to the line y = x to start the next iteration.

Incidentally, after 49 iterations the computed value x reaches 0 and stays there. This would not happen if we started with exactly x0 = 4 – π and carried out each iteration in exact arithmetic because then all the values of x are irrational.

The Lorenz system is a canonical example of chaos. Small changes in initial conditions eventually lead to huge changes in the solutions.

And yet discussions of the Lorenz system don’t simply show this. Instead, they show trajectories of the system, which make beautiful images, but do not demonstrate the effect of small changes to initial conditions. Or they demonstrate it in two or three dimensions where it’s harder to see.

If you’ve seen the Lorenz system before, this is probably the image that comes to mind. 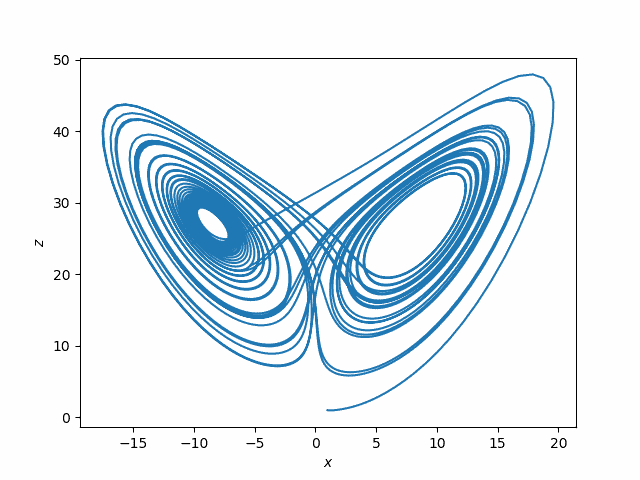 This plots (x(t), z(t)) for the solutions to the system of differential equations

The following plots, while not nearly as attractive, are more informative regarding sensitive dependence on initial conditions. In this plot, x1 is the x-component of the solution to the Lorenz system with initial condition

and x2 the x-component corresponding to initial condition

Notice first how erratic the x component is. That might not be apparent from looking at plots such as the plot of (x, z) above.

Below is the Python code used to make the two plots.

One important thing to note about the Lorenz system is that it was not contrived to show chaos. Meteorologist and mathematician Edward Lorenz was lead to the system of differential equations that bears his name in the course of his work modeling weather. Lorenz understandably assumed that small changes in initial conditions would lead to small changes in the solutions until numerical solutions convinced him otherwise. Chaos was a shocking discovery, not his goal.

The image below is famous. I’ve seen it many times, but rarely with a detailed explanation. If you’ve ever seen this image but weren’t sure exactly what it means, this post is for you.

This complex image comes from iterating a simple function

known as the logistic map. The iterates of the function can behave differently for different values of the parameter r.

Every time we apply f the result decreases by a factor of r.

As we do apply f more and more times, the result converges to 0.

For r ≥ 1 it’s not as clear what will happen as we iterate f, so let’s look at a little bit of code to help see what’s going on.

When r is a little bigger than 3, things get more interesting. Instead of a single fixed point, the iterates alternate between a pair of points, an attractor consisting of two points.

How can we write code to detect an attractor? We can look at the set of points when we get, say when we iterate 1000, then 1001, etc. up to 1009 times. If this set has less than 10 elements, the iterates must have returned to one of the values. We’ll round the elements in our set to four digits so we actually get repeated values, not just values that differ by an extremely small amount.

This is crude but it’ll do for now. We’ll make it more efficient, and we’ll handle the possibility of more than 10 points in an attractor.

Somewhere around r = 3.5 we get not just two points but four points.

As r gets larger the number of points keeps doubling [2] until chaos sets in.

The function attractors is simple but not very efficient. After doing 1000 iterations, it starts over from scratch to do 1001 iterations etc. And it assumes there are no more than 10 fixed points. The following revision speeds things up significantly.

Notice we put a cap of 1000 on the number of points in the attractor for a given r. For some values of r and x, there is no finite set of attracting points.

Finally, here’s the code that produced the image above.

Update: See this post for graphs showing the trajectory of points over time for varying values of r.

[1] Why is this only for 1 ≤ r ≤ 3? Shouldn’t (r – 1)/r be a fixed point for larger r as well? It is, but it’s not a stable fixed point. If x is ever the slightest bit different from (r – 1)/r the iterates will diverge from this point. This post has glossed over some fine points, such as what could happen on a set of measure zero for r > 3.

[2] The spacing between bifurcations decreases roughly geometrically until the system becomes chaotic. The ratio of one spacing to the next reaches a limit known as Feigenbaum’s constant, approximately 4.669. Playing with the code in this post and trying to estimate this constant directly will not get you very far. Feigenbaum’s constant has been computed to many decimal places, but by using indirect methods.

Pick a number x between 0 and 1. Then repeatedly replace x with 4x(1-x). For almost all starting values of x, the result exhibits chaos. Two people could play this game with starting values very close together, and eventually their sequences will diverge.

It’s somewhat surprising that the iterative process described above can be written down in closed form. Starting from a value x0, the value after n iterations is

Now suppose two people start with the same initial value. One repeatedly applies 4x(1-x) and the other uses the formula above. If both carried out their calculations exactly, both would produce the same output at every step. But what if both used a computer?

The two approaches correspond to the Python functions f and g below. Because both functions are executed in finite precision arithmetic, both have errors, but they have different errors. Suppose we want to look at the difference between the two functions as we increase n.

When we run the code, nothing exciting happens. The difference is a flat line. Next we increase n to 45 and we start to see the methods diverge. The divergence is large when n is 50. And the two functions are nearly completely uncorrelated when n is 55. So which function is more accurate, f or g? As noted in the comments, the two functions have different kinds of numerical errors. The former accumulates arithmetic precision error at each iteration. The latter shifts noisy bits into significance by multiplying by 2^n. Apparently both about the same overall error, though they have different distributions of error.

I recomputed g using 100-digit precision with mpmath and used the results as the standard to evaluate the output of f and g in ordinary precision. Here’s a plot of the errors when n = 45, first with f and then with g.