There is an ongoing controversy over whether the SARS-CoV-2 virus contains segments of the HIV virus. The virologist who won the Nobel Prize for discovering the HIV virus, Luc Montagnier, claims it does, and other experts claim it does not.

I’m not qualified to have an opinion on this dispute, and do not wish to discuss the dispute per se. But it brought to mind a problem I’d like to say something about.

This post will look at a simplified version of the problem posed by the controversy over the viruses that cause COVID-19 and AIDS. Namely, given two random DNA sequences, how long would you expect their longest common substring to be?

I’m not taking any biology into account here other than using an alphabet of four letters. And I’m only looking at exact substring matches, not allowing for any insertions or deletions.

Here we are concerned with substrings, not subsequences. Regarding the biological problem of comparing DNA sequences, it would seem that a substring is a strong form of similarity, but maybe too demanding since it allows no insertions. Also, the computer science idea of a subsequence might be too general for biology since it allows arbitrary insertions. A biologically meaningful comparison would be somewhere in between.

I will state theoretical results in the next section, but I’d like to begin with a simulation.

First, some code to generate a DNA sequence of length N.

Next, we need a way to find the longest common substring. We’ll illustrate how SequenceMatcher works before using it in a simulation.

meaning that the first match of maximum length, ATCAC in this case, starts in position 5 of the first string and position 1 of the second string (indexing from 0).

Now let’s run a simulation to estimate the expected length of the longest common substring in two sequences of DNA of length 300. We’ll do 1000 replications of the simulation to compute our average.

When I ran this code I got 7.951 as the average. Here’s a histogram of the results. 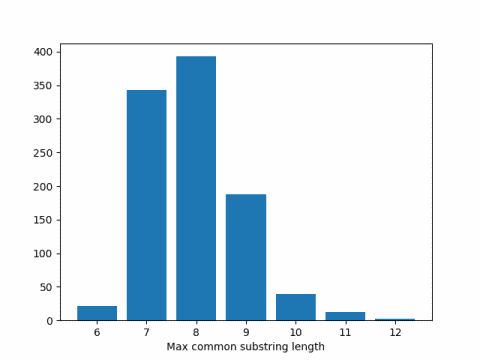 Arratia and Waterman [1] published a paper in 1985 looking at the longest common substring problem for DNA sequences, assuming each of the four letters in the DNA alphabet are uniformly and independently distributed.

They show that for strings of length N coming from an alphabet of size b, the expected length of the longest match is asymptotically

There could be a couple reasons our simulation results were smaller than the theoretical results. First, it could be a simulation artifact, but that’s unlikely. I repeated the simulation several times and consistently got results below the theoretical expected value. I expect Arratia and Waterman’s result, although exact in the limit, is biased upward for finite n.

Update: The graph below plots simulation results for varying sequence sizes compared to the asymptotic value, the former always below the latter. 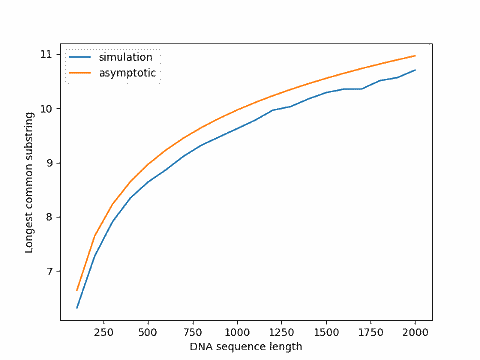 Arratia and Waterman first assume i.i.d. probabilities to derive the result above, then prove a similar theorem under the more general assumption that the sequences are Markov chains with possibly unequal transition probabilities. The fact that actual DNA sequences are not exactly uniformly distributed and not exactly independent doesn’t make much difference to their result.

A couple days ago the 60 Second Science podcast had an interesting story on dating medieval manuscripts. It turns out you can take DNA samples from the animal products in the pages. The hope is that the pages in undated manuscripts will have the same DNA signature as extant dated manuscripts, suggesting that the books were written around the same time.

Why should heights be normally distributed? If height were a simple genetic characteristic, there would be two possibilities: short and tall, like Mendel’s peas that were either wrinkled or smooth but never semi-wrinkled. But height is not a simple characteristic. There are numerous genetic and environmental factors that influence height. When there are many independent factors that contribute to some phenomena, the end result may follow a Gaussian distribution due to the central limit theorem.

The normal distribution is a remarkably good model of heights for some purposes. It may be more interesting to look at where the model breaks down. See my next post, why heights are not normally distributed.

Researchers recently discovered that identical twins are not genetically identical after all. They differ in the copy numbers of their genes. They have the same genes, but each may have different numbers of copies of certain genes.

Source: “Copy That” by Charles Q. Choi, Scientific American, May 2008.

A gene therapy developed at M. D. Anderson Cancer Center for head and neck cancer is the first such treatment to succeed in a phase III trial. See the press release for more details.