A square grid of distinct integers is a magic square if all its rows columns and full diagonals have the same sum. Otherwise it is not a magic square.

We could make this more interesting by asking how close to magic the square is, using a continuous measure of degree of magic, rather than simply asking whether the square is magic or not.

If we have an n by n square of real numbers, we could take the set of n row sums, n column sums, and 2 diagonals as data and look at its range or its variance. These statistics would be zero for a magic square and small for a nearly magic square.

Allen William Johnson [1] discovered the following magic square whose entries are all squares.

The following Python code verifies that this is a magic square.

Here are three things about dominoes, two easy and one more advanced.

First, how many pieces are there in a set of dominoes? A domino corresponds to an unordered pair of numbers from 0 to n. The most popular form has n = 6, but there are variations with other values of n. You can show that the number of dominoes is

This is because there are n+1 possible numbers (since blanks are a possibility) and each one is either a double or not. The number of ways to choose two distinct numbers is the binomial coefficient and the number of doubles is n+1.

where the symbol on the left is Stanley’s symbol for selection with replacement.

There are a couple ways to make a magic square of sorts from a set of dominoes. To read more about this, see this post. 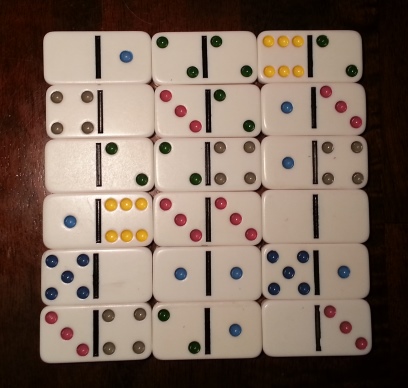 How many ways can you cover an m by n chess board with dominoes? The answer turns out to be

If you view a 3 × 3 magic square as a matrix and raise it to the third power, the result is also a magic square.

More generally, if you multiply an odd number of 3 × 3 magic squares together, the result is a magic square.

For example, here are three magic squares that appeared in my blog post on Spanish magic squares, and you can verify that their product is another magic square.

The same article conjectures that the results above are true for magic squares of any odd order. That was 20 years ago. Maybe the conjecture has been resolved by now. If you know, please leave a comment.

The following magic square has a couple unusual properties. For one, numbers appear in consecutive pairs. Also, you can connect the numbers 1 through 32 in a continuous path. I found this in Before Sudoku. The authors attribute it to William Mannke, “A Magic Square.” Journal of Recreational Mathematics. 1 (3) page 139, July 1968.

The following figure is a magic hexagon: the numbers in any straight path through the figure add to 38, even though paths may have length three, four, or five. I found this in Before Sudoku. The authors attribute it to Madachy’s Mathematical Recreations.

This is essentially the only magic hexagon filled with consecutive integers starting with one. The only others are rotations or reflections of this one, or the trivial case of a single hexagon.

Take any 3 by 3 magic square. For example, here’s the ancient Lo Shu square:

If you read the rows as numbers and sum their squares, you get the same thing whether you read left to right or right to left. In this case

Similarly, if you read the columns as numbers and sum their squares, you get the same thing whether you read top to bottom or bottom to top:

In addition to rows and columns, you can get analogous results for diagonals.

How would you prove this? Arthur Benjamin and Kan Yasuda give an elegant proof here using permutation matrices. Or you could use brute-force starting with Édouard Lucas’ theorem that every 3 by 3 magic square has the following form.

(For each a, b, and c there are eight variations on magic square given by Lucas, reflections and rotations of his square.)

In earlier blog posts I give examples of alphamagic squares in English and in Spanish. This post looks at French.

The Wikipedia article on alphamagic squares, quoting The Universal Book of Mathematics, says

French allows just one 3 × 3 alphamagic square involving numbers up to 200, but a further 255 squares if the size of the entries is increased to 300.

The French alphamagic square with the smallest maximum entry that I found is the following.

When spelled out in French we get

And when we replace each cell with its number of letters we get the following magic square:

A list of all the French magic squares with maximum element 300 that I found is available here.

In a previous post I gave an example of an alphamagic square in English. This is a magic square such that if you replace each number with the letter count when spelling out the word, you get another magic square.

I wondered whether I could find an alphamagic square in Spanish, so I wrote a script to look. I found two. (Plus there are eight rotations and reflections of each.)

The first is the following:

When spelled out in Spanish the numbers are:

And the number of letters in each cell gives:

Spelled out in Spanish:

Sum of the letters:

If my script is correct, these are the only examples (besides their rotations and reflections) for numbers between 1 and 200.

Next: Alphamagic squares in French

If you spell out the English name of each number

you get another magic square!

Update: Here are a couple alphamagic squares in Spanish and more in French.