Suppose you store a floating point number in memory, print it out in human-readable base 10, and read it back in. When can the original number be recovered exactly?

Suppose we start with base β with p places of precision and convert to base γ with q places of precision, rounding to nearest, then convert back to the original base β. Matula’s theorem says that if there are no positive integers i and j such that

Looking back at Matula’s theorem, clearly we need

is sufficient. In terms of base 2 and base 10, we need at least 16 decimals to represent 53 bits. The surprising thing is that one more decimal is enough to guarantee that round-trip conversions are exact. It’s not obvious a priori that any finite number of extra decimals is always enough, but in fact just one more is enough; there’s no “table maker’s dilemma” here.

Here’s an example to show the extra decimal is necessary. Suppose p = 5. There are more 2-digit numbers than 5-bit numbers, but if we only use two digits then round-trip radix conversion will not always be exact. For example, the number 17/16 written in binary is 1.0001two, and has five significant bits. The decimal equivalent is 1.0625ten, which rounded to two significant digits is 1.1ten. But the nearest binary number to 1.1ten with 5 significant bits is 1.0010two = 1.125ten. In short, rounding to nearest gives

and so we don’t end up back where we started.

[2] The number of bits allocated for the fractional part of a floating point number is 1 less than the precision: the leading figure is always 1, so IEEE formats save one bit by not storing the leading bit, leaving it implicit. So, for example, a C double has 53 bits precision, but 52 bits of the 64 bits in a double are allocated to storing the fraction.

In the previous post I mentioned that Remez algorithm computes the best polynomial approximation to a given function f as measured by the maximum norm. That is, for a given n, it finds the polynomial p of order n that minimizes the absolute error

The Mathematica function MiniMaxApproximation minimizes the relative error by minimizing

Here is Mathematica code to find and plot the Chebyshev approximation to ex over [-1, 1]. First, here are the coefficients.

The coefficients turn out to be exactly expressible in terms of Bessel functions, but typically you’d need to do a numerical integration with NIntegrate.

You could see the approximating polynomial with

shows the error in approximating the exponential function with the polynomial above.

This is an unusual recurrence if you’re used to orthogonal polynomials, which come up more often in application. For example, Chebyshev polynomials satisfy

as I used as an example here.

Notice that with orthogonal polynomial recurrences the argument x doesn’t change, but the degrees of polynomials do. But with Mittag-Leffler polynomials the opposite is true: there’s only one polynomial on the right side, evaluated at three different points: x+1, x, and x-1.

Something like the binomial theorem holds if we replace pn with Mn: 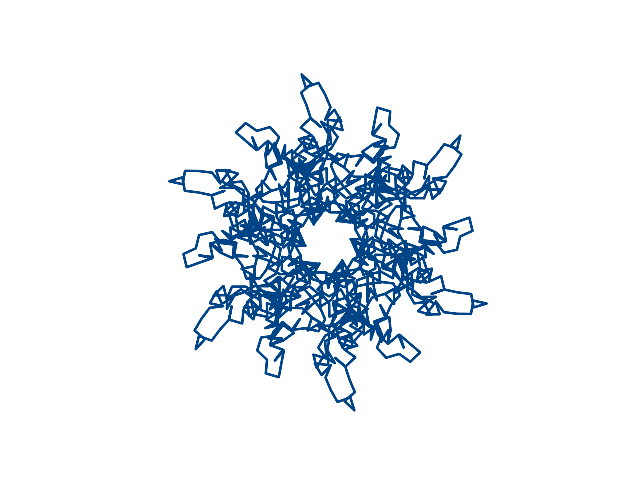 Let me back up and say what “today’s exponential sum” means. I have a page that plots a graph each day, where the function being graphed takes parameters from the date. It plots the partial sums of

where m is the month, d is the day, and y is the last two digits of the year.

Sometimes by coincidence the plots happen to look like something associated with the date, such as wreaths around Christmas. The plot for Christmas Eve this year looks like a branch of holly, and there’s a nice wreath on New Year’s Eve.

Since you can describe a point in the plane with two numbers, why would you choose to use three numbers? Why would you ever want to use a coordinate system with more coordinates than necessary?

One way to indicate the location of a point inside a triangle is to give the distance to each of the vertices. These three distances are called barycentric coordinates. Why would you use three numbers when two would do?

Barycentric coordinates are useful in applications, such as computer graphics and finite element analysis, because they are relative coordinates. When a triangle moves or is rescaled, you only need to keep track of where the vertices went; the coordinates of the points inside relative to the vertices haven’t changed.

Barycentric coordinates are related to Dirichlet probability distributions. When you have n probabilities that sum to 1, you’ve got n-1 degrees of freedom. But it often simplifies things to work with n variables. As with the discussion of triangles above, the extra variable makes expressions more symmetric.

A point in three dimensional space can be described with three numbers, but it’s often useful to think of the usual three coordinates as the vector part of a quaternion, a set of four numbers.

Suppose you have a point

and the axis b with the quaternion

The image of a is then given by the quaternion

This quaternion will have zero real part, and so the Euclidean coordinates are given by the vector part, the last three components.

Of course the product above is a quaternion product, which is not commutative. That’s why the q and the q-1 don’t cancel out.

In applications of algebra, such as elliptic curve cryptography, you often need to add “points at infinity” to make things work out. To formalize this, you add an extra coordinate. So while an elliptic curve is usually presented as an equation such as

Points in the projective plane have coordinates (x, y, z) where points are considered equivalent if they differ by a non-zero multiple, i.e. (x, y, z) is considered the same point as (λx, λy, λz) for any non-zero λ.

You can often ignore the z, choosing λ so that the z coordinate is 1. But when you need to work with the point at infinity in a uniform way, you bring out the full coordinates. Now the “point at infinity” is not some mysterious entity, but simply the point (0, 1, 0).

If you take a square matrix M, subtract x from the elements on the diagonal, and take the determinant, you get a polynomial in x called the characteristic polynomial of M. For example, let

The Cayley-Hamilton theorem says that if you take the original matrix and stick it into the polynomial, you’ll get the zero matrix.

In brief, a matrix satisfies its own characteristic equation. Note that for this to hold we interpret constants, like 12 and 0, as corresponding multiples of the identity matrix.

You could verify the Cayley-Hamilton theorem in Python using scipy.linalg.funm to compute a polynomial function of a matrix.

This returns a zero matrix.

I imagine funm is factoring M into something like PDP-1 where D is a diagonal matrix. Then

This is because f can be applied to a diagonal matrix by simply applying f to each diagonal entry independently. You could use this to prove the Cayley-Hamilton theorem for diagonalizable matrices.

The following C program prints an asterisk when the bitwise-and of i and j is zero.

Here’s a screenshot of the output. Suppose ages in some database are reported in decades: 0, 10, 20, etc. You need to add a 27 year old woman to the data set. How do you record her age? A reasonable approach would to round-to-nearest. In this case, 27 would be rounded up to 30.

Another approach would be stochastic rounding. In our example, we would round this woman’s age up to 30 with 70% probability and round it down to 20 with 30% probability. The recorded value is a random variable whose expected value is exactly 27.

Next, suppose we add people to the database of varying ages. Stochastic rounding would record every person’s age using a random variable whose expected value is their age. If someone’s age is a d+x where d is a decade, i.e. a multiple of 10, and 0 < x < 10, then we would record their age as d with probability 1-x/10 and d+10 with probability x/10. There would be no bias in the reported age.

Round-to-nearest will be biased unless ages are uniformly distributed in each decade. Suppose, for example, our data is on undergraduate students. We would expect a lot more students in their early twenties than in their late twenties.

Now let’s turn things around. Instead of looking at recorded age given actual age, let’s look at actual age given recorded age. Suppose someone’s age is recorded as 30. What does that tell you about them?

Stochastic rounding preserves more information than round-to-nearest on average, but less information in the case of a particular individual. 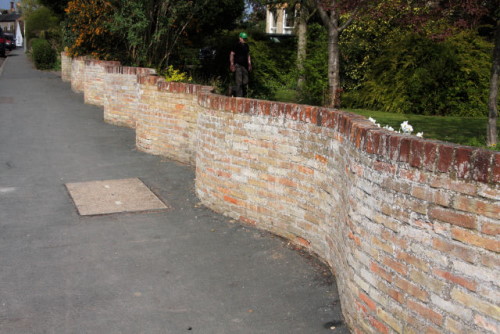 The amount of material used in the wall is proportional to the product of its length and thickness. Suppose the wall is shaped like a sine wave and consider a section of wall 2π long. If the wall is in the shape of a sin(θ), then we need to find the arc length of this curve. This works out to the following integral.

The integral above cannot be computed in closed form in terms of elementary functions, so this would make a good homework exercise for a class covering numerical integration.

The integral can be computed in terms of special functions. It equals 4 E(-a²) where E is the “complete elliptic integral of the second kind.” This function is implemented as EllipticE in Mathematica and as scipy.special.ellipe in Python.

As the amplitude a increases, the arc length of a section of wall increases. You could solve for the value of a to give you whatever arc length you like. For example, if a = 1.4422 then the length is twice that of a straight line. So a crinkle crankle wall with amplitude 1.4422 uses about as many bricks as a straight wall twice as thick.

For inverse cosine, the usual choice is to return values in the closed interval

Aside from how to define inverse trig functions, there’s the matter of what to call them. The inverse of tangent, for example, can be written tan-1, arctan, or atan. You might even see arctg or atn or some other variation.

Software implementations typically follow the conventions above, and will return the same value for the same inputs, as long as inputs and outputs are real numbers.

Many programming languages have a function atan2 that takes two arguments, y and x, and returns an angle whose tangent is y/x. Note that the y argument to atan2 comes first: top-down order, numerator then denominator, not alphabetical order.

However, unlike the one-argument atan function, the return value may not be in the interval (-π/2, π/2). Instead, atan2 returns an angle in the same quadrant as x and y. For example,

For example, in Python,

returns a domain error and

returns 1.5707964 – 1.3169578i. Both SciPy and Common Lisp return complex numbers whose sine equals 2, but they follow different conventions for what number to chose. That is, both

in Common Lisp both return 2, aside from rounding error.

In C99, the function casin (complex arc sine) from <complex.h>

The Common Lisp standardization committee did a very careful job of defining math functions for complex arguments. I’ve written before about this here. You don’t need to know anything about Lisp to read that post.

The committee ultimately decided to first rigorously define the two-argument arctangent function and bootstrap everything else from there. The post above explains how.

Other programming language have made different choices and so may produce different values, as demonstrated above. I mention the Common Lisp convention because they did a great job of considering every detail, such as how to handle +0 and -0 in IEEE floating point.